Announcement for Allan Kaprow’s 1968 Three Country Happening in NYC, Germany and Argentina, one of the earliest telecast international performance pieces.

In the pre-Internet days they might have been unaware that half a world away, Eastern European and Latin American artists were catching wind of this new art wave and stamping their own brand on their local art scene.

MoMA’s show, Transmissions: Art in Eastern Europe and Latin America, 1960-1980, captures the zeitgeist and shines a light on the artists, movements, and pieces from important avant-garde artists whose names are not as well known in the States. See it through January 3.

Organized into several rooms and themes, it’s a great collaboration among MoMA’s Departments of Media and Performance Art, Photography, and Drawings and Prints. The result puts a lot of MoMA’s huge Fluxus collection into a proper world context.

The first half of the show deals with geometry and its spiritual significance, offbeat artist publications, and mash-us between mail art and street performance.

Favorites include post-minimalist pieces from Brazil, Suprematist-style wall works by Yugoslavia’s Mangelos and an entire wall of photos documenting push-the-envelope street art many Eastern European countries. See our Flickr feed for a walk-through and click the links below for glimpses into MoMA’s show blog.

The next section turns more socio-political with works from the Argentine collective, Instituto Torcuasto di Tella – a center of the avant garde in Buenos Aires from 1959 to 1970. The centerpiece is a large installation for the Venice Biennal by David Lameles – Office of Information about the Vietnam War at Three Levels: The Visual Image, Text and Audio. The glass-walled newsroom is a stage from which performers read “breaking news” from the Vietnam War, just as they did when the collective debuted this in 1968. When the performers aren’t present, visitors can listen to archival recordings in three languages to feel transported back in time and reflect on how and if things have changed. 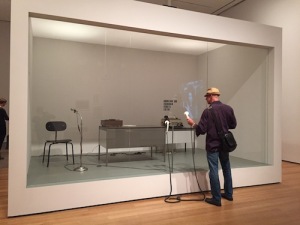 Nearby, visitors see clips from Marta Minujin’s Simultaneity in Simultaneity part of Allen Kaprow’s 1968 Three Country Happening, which was one of the first international telecasts of performance art.

Other galleries feature the blossoming of feminist art and performance art, social-commentary painting and sculpture, and poster art on these two continents. Artists that are familiar in US collections — like Botero (Colombia), Marisol (Venezuela), Marina Abramonovic (Serbia), and Ana Mendieta (Cuba) – are displayed in galleries that introduce other stellar artists to entirely new US audiences.

Consider Oscar Bony’s photo documentation of his controversial 1968 performance piece, The Working Class Family, where an actual Argentine family displayed themselves for the run of an exhibition at Instituto Torcuasto di Tella. Or Romanian graphic designer Geta Bratescu’s Medea IV, a 1980 sewing-machine drawing made and displayed privately in her studio at the height of a repressive political regime when most artists retreated underground.

The show ends with a spectacular installation: Juan Downey’s 1975-76 masterwork, Video Trans Americas. The gallery floor is painted with an outline map of the Western Hemisphere with banks of video monitors placed atop countries to which he traveled from the tip of South America to New York City, showing the life and times of indigenous people.

Inspired by the idea of a transnational identity, Downey’s piece beautifully sums up the feeling of the entire show – artists and people engaged in a cultural dialogue across time and space.

Thankfully MoMA has given these artists a timeless showcase and home.