Since Philadelphia museums, zoos, and gardens began posting videos online in 2008, collective YouTube views have climbed to 2.4 million, as chronicled in our latest report, Philadelphia Museums: 2013 Video and Social Media Rankings. The biggest surprise about the Philadelphia museum videos is that stylistically they are a bit different than New York museum videos. The institutions in Philly take a more whimsical approach to science, use a lot more promotional videos to drive exhibition attendance, and occasionally throw in a bit of the macabre.

The Top Philadelphia Exhibition Video of 2012, courtesy of the Longwood Gardens grounds crew and Bruce Munro

Highlights of our report on 32 Philadelphia museums:

As of year-end 2012, the Philadelphia institutions with the highest number of total YouTube channel views are the Penn Museum, the Mutter Museum, and Longwood Gardens. Penn’s channel features a mix of behind-the-scenes videos about exhibits, anthropology lectures, and a gigantic docu-archive; the Mutter produces highly creative shorts highlighting selections from its tantalizingly weird collection; and Longwood simply has tons and tons of fans that want to see what’s up with the seasons.

Last year, Longwood Gardens produced Philadelphia’s highest rated museum video — Light: Installations by Bruce Munro. Over 36,000 nature and art lovers viewed this short about Longwood transforming itself into Munro’s luminous vision. The garden also pumped out other video promos and features all year that kept their fans coming back to hit the YouTube channel. 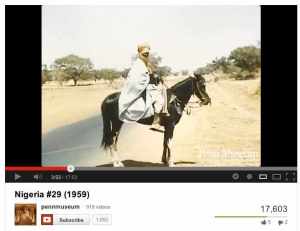 The Penn Museum’s Top 2012 Anthropology Video Nigeria #29 (1959) features a sheik, a mosque, a fuel depot with camels, and country life the way it used to be

The Penn Museum’s YouTube channel surpassed 1 million views in May. Penn’s been adding an enormous anthropology film collection to its channel (over 400 films) and the time-machine quality is irresistible. It’s no surprise that Penn’s Maya 2012: Lords of Time videos captivated the public all year, but it is interesting that the silent travelogue Nigeria #29 (1959) is up to 17,000 views. You could poke around that channel for days.

The Mutter Museum presents its unusual medical collections quite effectively through its YouTube series. Their 2012 series feature the curator taking “mystery” items out of the cabinets and challenging the viewers to identify them. Not for the squeamish, but really clever and nicely scripted.

The most active museum Twitter users in Philadelphia are the National Constitution Center, the Eastern State Penitentiary, and the Penn Museum. The most active Flickr users during 2012 were the Franklin Institute Science Museum and the Pennsylvania Academy of the Fine Arts. The largest Flickr photo pools are populated by Longwood Gardens and Eastern State Penitentiary enthusiasts.

All the video and social media details on 32 museums are in the report. Click here to see what’s included and make a purchase from our Its News To You Reports shop.