Al watches over his studio at NYPL for the Performing Arts

Tony favorite Kinky Boots is playing at the Hirschfeld, but as you contemplate the number of awards it will pick up Sunday night, walk over to the entrance of NYPL at Lincoln Center to pay tribute to Al himself. Peek through the window of NYPL for the Performing Arts to see the nook where every Broadway star since the 1920s had their portrait done –the studio of Al Hirschfeld, the man who immortalized them all.

Look through the window and you’ll see his drawing table, lamp, and the cozy, cushioned barber chair where he perched day after day, recording entertainment history over the decades with his unmistakable whimsical flair and line. The Lincoln Center library is a fitting home for Al’s studio furniture, since he consulted the NYPL theater archives for a lot of his work. 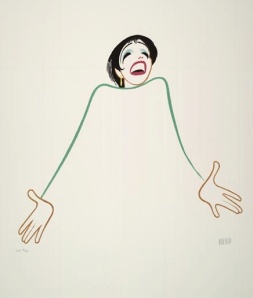 Liza in Minnelli On Minnelli (1999), one of more than 20 portraits Al did of her. Source: Library of Congress.

It’s hard to believe that Hirschfeld first began drawing celebrity caricatures in the 1920s, and continued his illustrious career for the next eighty years. Click on this link to his dealer’s site (Margo Feiden) to scroll through all the plays and musicals he’s covered, documenting the quirks, panache, and performances of everyone from Fanny Brice to Martin Short.

You can click through the “time table” of Al’s work at the gallery site, or in the Timeline of the Hirschfeld Foundation’s website. Every drawing after 1948 was done from a cushioned barber chair in which he could swivel to his heart’s content. Initially, he found it on the Bowery for $3.00, but the one you’ll see in the Performing Arts library entrance is the replacement (the original just wore out), which he bought in 1993 from a barber shop in the Chrysler Building.

So, pay tribute to Broadway’s most beloved artist. And before we post about the Impressionist Line show at the Frick, why not watch a 20th century master of line make his mark so you can imagine all the creativity that emanated from the table you see in the window. The clip from The Line King, uploaded to YouTube by Al’s grandson, documents the legend drawing a caricature of Paul Newman as he appeared in Our Town.