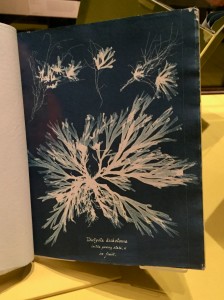 The New York literary and art world have spoken: nearly 150 years after photography pioneer Anna Atkins faded into obscurity, her work is receiving the tribute it deserves in the NYPL’s Wachenheim Gallery off Fifth Avenue – gorgeous, hand-crafted compositions of ephemeral marine flora in hand-stitched volumes, using a untested, new technology.

Blue Prints: The Pioneering Photographs of Anna Atkins, on display through February 17, is a show that has it all – an artistic first, a publishing breakthrough, Victorian time travel back to Darwin’s day, and a resurrection story of a visionary woman rescued from history’s dustbin. Although this innovator was born in 1799, it’s the first full full-blown retrospective of her work.

The show centers on the achievements of a female amateur botanist, who came up with an ingenious method to use one of the latest technology breakthroughs to transform her specimen collection of British algae into the world’s first book illustrated entirely through photographs. It’s also the first scientific book illustrated that way.

In a day where smartphones have made image taking (and making) ubiquitous, Anna’s show takes you back to the time before photographs, where meticulously observed drawings, sketches, and a watercolor box were the only means available to record the floral wonders of the world.

As a talented young artist, her scientist father commissioned her to illustrate his translations of Lamarck.

In 1842, Anna heard about a family friend’s accidental discovery of cyanotypes – basically blueprint technique – and she had a brainstorm. Instead of making drawings of plants that would require tedious hours of replications by hand, maybe the new technique could let the sun do the work.

She treated paper with a mix of chemicals, arranged her botanical specimens on top, and exposed it to the sun. 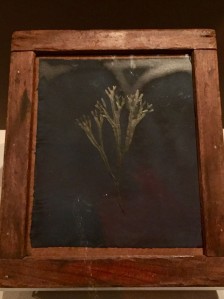 The photographic impressions were incredible – detailed and beautiful. The task of documenting her collection of complex, seaside plants now didn’t seem so overwhelming.

Although this is a tiny show, the gallery experience delivers quite an aesthetic impact  – rows of rare prints in blazing blue, delicate images of marine plants that compel close study, and exquisite hand-stitched bindings on multiple volumes, lovingly created for family and friends. It’s a maker tour de force.

In her day, Photographs of British Algae: Cyanotype Impressions was considered a triumph of technology, art, and science. 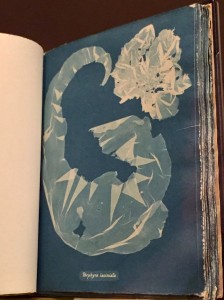 Most of the gorgeous books and artworks in the show have been acquired by NYPL. The curators have added a range of other items to put Anna’s achievement in context – early herbariums, Anna’s own watercolors, a frame used for making cyanotypes, and Henry Talbot Fox’s first book promoting all the ways that his “photographic drawing” invention could be applied.

To drive the last point home, the curators included a 1839 magazine that wrote about Talbot’s invention. But upon closer inspection, there’s something quite curious: No one had yet figured out how to use photographs as publication illustrations, so the magazine commissioned a woodcut to replicate what a “photographic drawing” looked like!!

Album of 74 artistic cyanotypes created in 1861 by Anna Atkins and her friend, Anne Dixon

Anna’s cyanotype techniques allow her pages to still dazzle 175 years after they were made, compared to other early photo techniques whose images have faded and remain barely visible to the modern eye.

Later in life, Anna collaborated with her childhood friend on artistic arrangements of botanical specimens that went way beyond algae.

The show is dazzling and should serve as an inspiration to anyone with a passion, a collection, and the creativity and drive to take a personal project and see it through to the end.