Nimble knights and knaves again take the stage tonight amidst the horses, banners, shields, lances, and heraldry of the Metropolitan Museum’s Hall of Arms and Armor in Battle! Hip-Hop in Armor, part of MetLiveArts.

The amazing dancers from It’s Showtime NYC are putting on their gauntlets and knee guards to show spectators what it’s like to bring medieval and Renaissance armor to life in a co-production with the Met’s Department of Arms and Armor.

Tonight’s program is the third in a series of performances, running through spring, where street-style choreography presents a modern interpretation of chivalry, battles, honor, mysterious tales, and ghosts.

The dancers took a crash course in the days of old from curators in the Met’s Arms and Armor department and got to learn how to apply accoutrements that are normally relegated to the mannequins and cases in the popular hall.

Bashford Dean, the Victorian world traveler and collector who began this department over 100 years ago, would have loved it, since he is a man that also liked to dress up in similar regalia.

The troupe from It’s Showtime have created several dance pieces, including one that tells the story of a long-dead king who springs to life from his medieval tomb to terrorize craft thieves who try to steal his stuff.

Rising up dressed in an authentic chain-mail tunic, the king brings zombie-like commotion to the tale and answers the choreographic question: How does a dancer bring a feeling of terrifying mayhem to the stage when he’s wearing that many pounds of heavy, constricting steel?

A conversation with curators revealed that although visitors see the armor displayed in static form, all of the engineering involved makes it incredibly flexible. So, asking dancers to try it on and create new moves actually shows off something that isn’t apparent about the Met’s incredible collection. 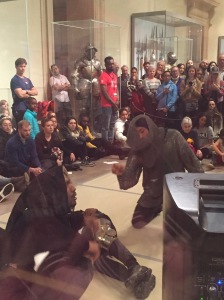 Congratulations to the curators of Arms and Armor, MetLiveArts, and the It’s Showtime NYC dancers for such a fantastic concept and program! More! More!

And in case you think this is the first time the Arms and Armor curators have ever tried to put a new twist on a medieval subject, take a look at one of Bashford Dean’s brainstorms when movies were just starting to be made in Queens.

Yes, he talked to Barrymore and other early actors and directors of American cinema on just how to get people interested in the past. Here’s a link to one of Bashford Dean’s media pieces that also brought the knights back to life: