Jeremy Scott’s 2015 crazy-fun leather and zipper ensemble for Moschino, featured on posters for the show.

Everyone has an opinion about the color, and that’s brought to bear on the fun, irreverent, and insightful show at the Museum at FIT, Pink: The History of a Punk, Pretty, and Powerful Color, on view through January 5.

FIT’s downstairs gallery shows a retrospective of pink in fashion in the first room, anchored by Gwyneth Paltrow’s pale pink Ralph Lauren slip-gown that everyone remembers from the 1999 Oscars.

A stroll around the room is chronological, beginning with a fancy and frilly girly-girl two-piece ensemble from the 1850s, through ice-pink Chanel from the flapper period to pale pink plasticized space-age Courréges coats to the hot-pink satin features on Eighties society-ball statements by Adolfo and others. 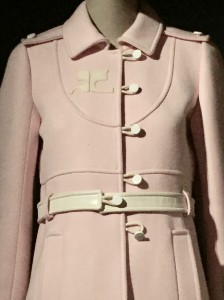 There’s even a full pink immersion installation of My Little Pony, Hello Kitty, and Barbie to make the point that for much of the 20th century in the West, pink has been associated with little-girl things.

Through the doors to the main gallery, curator Valerie Steele shows us the facets of how pink functions in a global society, as a transgressive color, as a wry joke, and even a power statement when applied to menswear.

One of the most interesting facts about pink is hidden in tiny label copy inside the first historical tableaux – a gorgeous 1775 silk brocade robe á la française on loan from the Los Angeles County Museum of Art and man’s suit from the same Pompadour Pink period.

The word “pink” only entered the English language in the eighteenth century – the same time that the word “rose” was coined in French.

So, yes, despite the color’s appearance in the natural world prior to the burst of fashionable plant cultivation in the 18th century, it really took off as a response to horticulture that was reflected in fashions for both ladies and men.

From there, the exhibit explores how pink came to be associated with gender-specific kids’ clothes in the early days of Western consumer culture and how it was adapted as a “like life” color in lingerie and lingerie-inspired outerwear.

There are iconic pinkish women-as-flower dresses by Charles James from the Thirties and Fifties, and examples of Schiaparelli’s “shocking pink” reimagined by the house that bears her name today. 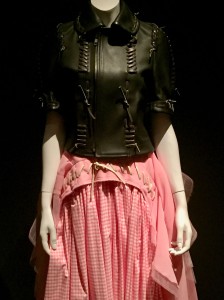 It’s a great contemporary touch to see how punks and Rei Kawakubo subverted pink, and how Janelle Monae, Rihanna, and rappers have used it for their own pop-shock purposes.

See details of our favorites in our Flickr album. For fun, we’ve arranged the photos in chronological order and zoomed in on the embroideries, draping, embellishment, and masterful stitchery.

As usual, FIT has done an outstanding job on the digital side of the exhibition. Take a look at the exhibition website and FIT Flickr site, showing full-length photos of the ensembles. Listen to the audio tour of the show.