As soon as you walk into the Whitney’s show, Dreamlands: Immersive Art and Cinema, 1905-2016, you are face-to-face with a giant screen on which stylized robotic dancers perform what seems like a space-age, mechanized dance.People are lounging on giant foam blocks, watching the colorful piece unfold. But most of the visitors are unaware that the seeds of this startlingly modern performance, shot in 1970 for German television, is a recreation of an innovative, theater-dance piece that’s 95 years old — The Triadic Ballet that Bauhaus director Oskar Schlemmer created in 1922. 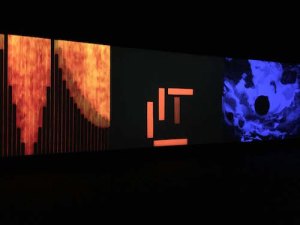 There’s a lot of history-tripping in this exciting retrospective, which closes this weekend. Everything in the show is pulled from the Whitney’s own collection – a rare chance to experience hard-to-display movies, slide shows, and interactive experiences. Take a look in our Flickr album to glimpse some of our favorites.

To see it all, you twist and turn through labyrinths, enter through darkened curtains, and explore mysterious giant boxes positioned throughout the 18,000 square-foot space.

At every juncture, there’s something new, exciting, provocative, and challenging. The big surprise is that the pieces are from the entire span of the 20th century, beginning with Edison’s double whammy – the invention of the electric light bulb and motion-picture camera – as presented in the 1905 film he commissioned, Coney Island at Night.

In addition to Triadic Ballet, 1920s Germany is also represented by a colorful three-screen abstract movie installation by Oskar Fischinger, who was later hired by Disney to create some of the initial concept art for Fantasia, the animated concert-movie extravaganza that is also represented in the show.

Stan Vanderbeek’s roomful of projectors represents the Sixties, displaying a cacophony of simultaneous pop-culture images and abstract films on a crazy array of mismatched screens.

Bringing the collection up to date, visitors stop for selfies in front of the neon-flanked exterior of “Easternsports”, an immersive, candy-colored 2014 installation by Philadelphia artists Alex Da Corte and Jayson Musson. Just sit and smell the oranges as robotic actors go through their potty-mouthed paces in the four-screen room.

Peek into Easternsports via The Whitney’s look-about YouTube video. Move the arrows on the upper left navigator to look around and find the skateboarder crossing all the screens.

Enter a futuristic lounge to watch Hito Steyerl’s 2015 “Factory of the Sun,” a fake newscast-documentary about workers who are forced to dance to generate sunlight. The mysterious, high-energy saga has everything from anarchists at the World Bank to YouTube sensations inspiring Japanese avatars.

The giant video is a challenging and provocative burst of energy to end your Dreamlands odyssey and nice bookend to the Triadic Ballet rebooting next door.