The Artforum Lounge on the Contemporary Pier

For four action-packed days, the art crowd made its way to the West Coast of Manhattan Island past gritty lots, warehouses, the ball fields of Clinton, and high-rises-under-construction to enter a white, light-filled glittery expanse of painting, sculpture, and champagne bars at the 2014 edition of The Armory Show.

This year, 205 exhibitors showed off the best in modern masters and contemporary upstarts. Walk through it with us on our Flickr feed.

If you’ve never been there, just know that the art fills two full piers (yes, where the cruise ships come in). You may think the Whitney Biennial is big, but The Armory promenade is vast.

On the Modern Pier: Chicago’s Alan Koppel Gallery gave tribute to original Armory Show in 1913 with several Duchamps, but most of the work is post-1940 by Modern superstars. Right at the start of the pier, Galleria d’Arte Maggiori positioned a nice rough-and-ready Mattia Moreni in kind-of a face-off with a pretty primitive Basquiat nearby.

Best on the Modern Pier: Vivian Horan’s booth, dominated by a large Elaine de Kooning charcoal drawing with collage, but populated by two small Picasso ceramics that most fair goers didn’t even see, although they were practically out in the aisle. You don’t see Picasso ceramics too much, and they really added a nice touch.

Second runner-up was the Armand Bartos booth with a sharp Kenneth Noland, Andy’s chicken soup can under glass, and a no-holds-barred Stella. In fact, there were multiple 1980s 3D Frank Stellas leaping out from walls, demanding attention. Besides posing with the soup can, lots of visitors were snapping photos of themselves in front of Mr. Stella’s work. 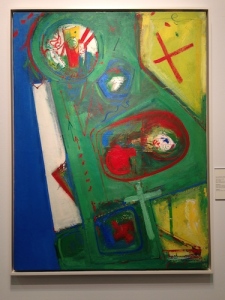 Welcomed surprises: Even though he taught most of the post-war painters in New York, you don’t often see Hans Hoffman paintings, so it was nice to encounter one of his color explosions at Crane Kalman. And we’ve never seen the two super-early skinny Lichtenstein sculptures at Barcelona’s Galeria Marc Domenech booth. Guess they were made in those lean before-the-dots years on his path to Pop. 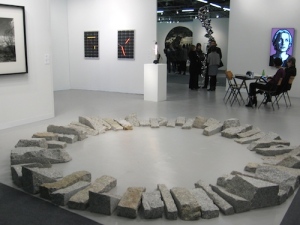 Although you could hike outdoors to get to the second pier along the West Side Highway, most were guided through a wormhole and down a flight of stairs to descend directly into the booths from 17 contemporary galleries across China – a great landing into a warren of booths featuring installations (watch out for the Roomba!), and user-friendly exercise equipment that the PRC makes available in public parks for citizen fitness.

A great place to end the journey was at the Jack Shainman booth, with its dramatic contemporary art exploring expressions from Africa, African-Americans, and global artists — the Nick Cave soundsuits and Richard Mosse’s spectacularly dissonant hot-pink infrared photograph of a waterfall in the continually disintegrating, war-torn Democratic Republic of Congo.

Take a look at the highlights here.