One of the most recognizable trains in the history of modern art hasn’t left the station. It’s coming out of the wall at MoMA until January 12 as part of the tribute to Belgium’s only big-time Surrealist painter, Magritte: The Mystery of the Ordinary, 1926–1938. But don’t worry – this intriguing tribute chugs on, arriving at The Menil in Houston on Valentine’s Day (February 14) and at Chicago’s Art Institute on June 25. Catch it, because it’s loaded with new revelations, in person and on line.

In person: So many of paintings are icons of 20th century art, that it’s shocking to think that one anarchic visual artist had the chops to turn out so many great works in such a relatively short period of time. Walking through the first couple of galleries, you’ll recognize many famous images, but check out the dates on the labels: 40 were done in just his first three years in Paris between 1927 and 1929! He was so prolific, it makes you wonder when he made time to hang out at cafes, discuss dreams, and publish with Breton and the rest of the crew. 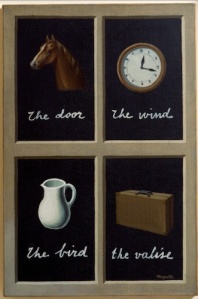 Magritte liked making the familiar unfamiliar, playing with fact and fiction, probing dreams and reality, and appropriating pop culture into an art context.

Like Andy Warhol, Magritte began as an ad illustrator, and MoMA’s curators have included a few of his early fashion illustrations. It’s surprising to know that phrases that he injected onto his canvas (like “Ceci n’est pas une pipe”) were written in a script that was one of the most recognizable fonts used in European newspaper and magazine ads in the Twenties.

Was appreciation of Magritte’s ground-breaking cultural appropriation and subversion lost on our own American Pop pantheon? Not really, and the evidence is that one of the best examples of Magritte’s sly presentation of an everyday-object grid with ironic words was lent by the midcentury grandmaster, Jasper Johns.

So much contemporary pop culture and advertising art has reinterpreted, reimagined, and referenced Mr. Magritte’s images that it’s easy to forget that they rocked the world in the Twenties. His reverberation with our beloved 1960s Pop masters (and this show) reminds us that Mr. Magritte truly blazed an innovation pathway in taking the everyday and turning it into art.

And speaking of pioneering, check out the amazing interactive site that lets us enter Magritte’s mind; learn how he turned nature, desire, dreams, language, and symbols into troubling, evocative, subversive works; and see the behind-the-scenes conservation and curatorial work. The beautiful, musical experience is designed by Hello Monday, and should probably win a Webby Award. See it now.

You’ll see how MoMA took off the old varnish, examined the canvases under ultra-violet light, and did detective work of which Magritte and his silent-movie-icon inspiration, Fantômas, would be proud.

Spend time letting each painting’s mini-site load into your browser window, click to hear the curators talk, and keep scrolling down to see what the conservators discovered. You can even toggle back and forth to see the surface of the painting and X-ray.

As a preview, here’s the YouTube video about the “lost” Magritte painting that conservator Cindy Albertson found lurking underneath The Portrait.

And while you’re at it, you might take a minute to see what technology was at work in possibly Magritte’s most famous image: