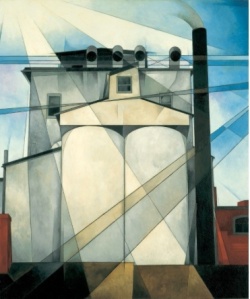 Charles Demuth’s precisionist take on the grain elevators in his hometown, My Egypt, 1927.

Five reasons to cozy up with the stars in the American Art Walk of Fame in the Whitney’s top-floor show, American Legends: From Calder to O’Keefe before December 15 when they come down to make room for the next batch of legends from the Whitney’s massive collection:

#1: Charles Demuth. See how he turned the industrial landscape of his Lancaster, Pennsylvania hometown and flowers from his garden into magic. Experience Demuth’s oil, My Egypt, a pristine oil that looks like it was painted yesterday. He captures the monumentality of the local grain elevators and uses his title to channel the greatest architectural feats of the ancient world. The beautiful floral watercolors were some of Ms. Whitney’s favorites. 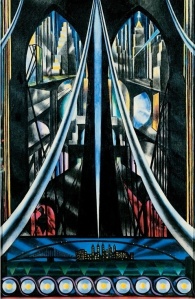 A Joseph Stella masterpieces: The Brooklyn Bridge: Variation on an Old Theme, 1939.

#2: Joseph Stella’s interpretation of 1930s New York, including one of his best-known works, The Brooklyn Bridge: Variation on an Old Theme, 1939. Here, the painting evokes a cathedral’s stained glass window but it’s actually a love letter to the iconic structure that he painted so many times in his career. If you’ve never walked across this bridge, listen to a civil engineer interpret Mr. Stella’s work on the Whitney’s audio guide.

#3: Immersion into bygone New York. Check out Coney Island’s main attraction in 1913 via Mr. Stella’s Luna Park (here’s the audio). Also, the show has many Reginald Marsh works of life during the depression, including Why Not Take the “L”?, and the original “ten cents a dance” girls in his 1933 portrait of taxi dancers.

#4: The whimsy of sculptor Elie Nadelman, whose large, rounded, folk-art-inspired figurative sculptures could certainly work in Mr. Calder’s crazy circus (which is here, too), if they could only be shrunk down to fit into his tiny, tiny circus ring. 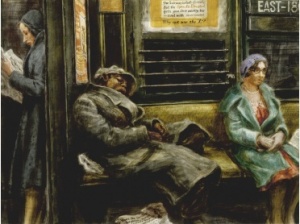 Reginald Marsh asks commuters a question in Why Not Use the “L”?, 1930

Mr. Nadelman looms large in the Whitney collection, and it’s nice to have a great, big room to dance around all his sculpted people.

There’s a lot to enjoy about many of the other featured legends, so hurry over to drink in the colors of Stuart Davis, watercolors of John Marin, the sharp visions of Ralston Crawford, and eight other anchors of the Whitney collection. 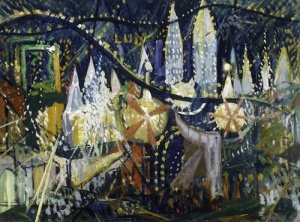 Who will be featured next on the top floor? We’ll see who the curators pick on December 21, when they reveal their next group of Legends.

2 thoughts on “Meet American Legends at The Whitney”