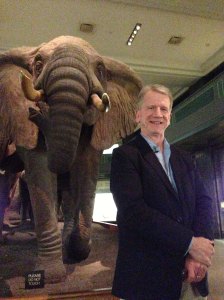 Steve Quinn couldn’t send them to the L’Oreal Paris hair and make-up room like Tim Gunn does on Project Runway. They’re just too big, too famous, and too fragile. We’re talking about the furry animals that populate the 43 dioramas on Floor 1 of the American Museum of Natural History’s in the Hall of North American Mammals.

So how do you buff, puff, make up, color, groom, blow dry, restore eyelashes, color brows, and repair noses on New York superstars that have been in the (literal) spotlight since the early 1940s? That’s the subject of AMNH’s YouTube sensation, Restoring Dioramas in Hall of North American Mammals – a 16-show reality series that won a prestigious Webby Award earlier this month. Download the North American Mammal app (with before and after looks at the enhanced fur).

No more “demon” eye in the baby Mountain Goat, who is surrounded by thousands of flowers refurbished by AMNH volunteers

Steve Quinn leads a team of accomplished artists to, well, perform makeovers on the animals, plants, and background paintings that reside inside some of the most famous 3D attractions inside the AMNH. Steve told us that the first step was to update the decades-old lighting inside each case with state-of-the-art illumination that would inflict much less damage on the mammal coiffures.

His team engineered wooden platforms that extended into each scene so that leaf-turning and snow repair could occur with minimal disruption to the diorama floor. If you watch the 4-minute videos, you’ll see how they fixed a bison’s nose, put whiskers on cougars, restored the grass on the Great Plains, and restored the jackrabbit’s ears. The runaway hit of the series is Updating the “Moon Shadow” in the Wolf Diorama. With over 8,000 views, it’s not going to knock Dr. Neil off the AMNH charts any time soon, but Steve’s magical artistry is something to savor.

Go to the AMNH YouTube channel and scroll down to find the North American Mammal diorama series, depicting Steve and his crew at work. Check out this series trailer:

Just before Steve retired the other week, he gave us a special Night at the Museum, walking around and visiting his favorite dioramas after the visitors left.

Steve, you’re a total rock star. Thanks for all your spectacular work at AMNH over the years, and congratulations on the Webby.

Elvis has left the building.