If you need a pop of color, head over to the Guggenheim and spend some time inside The Fullness of Color: 1960s Painting, on display through March 15.

The Sixties were a time when painting was going through a big shift, and the exhibition will take you back to a time when up-and-coming painters were going big, seeing what lay beyond expressionist brushwork, and taking a cool, cool approach to color.

Although the world knew that Jackson Pollack was splattering oil paint across canvas on the floor of his East Hampton studio, other abstractionists in Manhattan, Washington, D.C., and art hot spots around the world were trying radical approaches to painting, too – exploring the expressive and expansive use of color.

Acrylic paints were new on the scene, and could be applied thick or thinned out like watercolor. Canvas was often laid out without primer, allowing the paint to soak into the canvas or blend in watercolor-like ways.

Helen Frankenthaler was the inspirational innovator in this regard, saturating her canvases with big washes of color. Although she began as a gestural painter, her big experiment was to work directly on the floor and spread paint around to eliminate any gestural marks. The results are spectacular.

Morris Louis, for example, experimented further by pouring paint on the unprimed canvas and letting gravity do the work of spreading it in different ways.

His 1959 work in the Guggenheim exhibition is a perfect example of his innovation ­– the “new” medium of acrylic washes, monumentally sized work, and a grand veil of color.

Getting close to this giant canvas lets you appreciate that this was not a sloppy or haphazard approach. It was masterful manipulation of chance on a large scale. 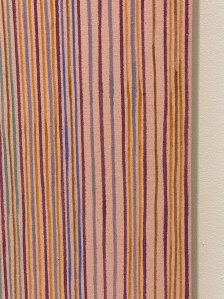 Other big canvases in the show exemplify other process experiments of the time: Jules Olitski used spray-paint techniques to eliminate gesture while giving the canvas bits of texture.  Getting close to his 1970 canvas lets you see the tiny, grainy splatters and the straight-line color bars he places at the edge; step back, and colors blend into a subtle, uninterrupted haze.

The gigantic Gene Davis canvas appears to be uniform pinstripes, but closer inspection allows you to appreciate the fact that he painted each tiny vertical mark freehand. The marks aren’t “gestural” but the full work is a monument to a hand-crafted, exacting process.

The curators also give us a chance to enjoy works by artists that we haven’t seen in a while ­– the saturated, thick geometric marks by Japan’s Toshinobu Onosato and the mesmerizing, oscillating presence of color created by Wojcietch Fangor, a Polish artist that the Guggenheim honored with an exhibition in 1970. 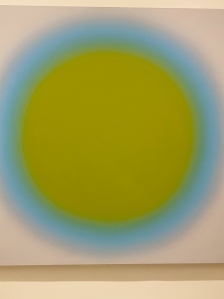 See some of our favorite works in our Flickr album, and listen to the audio tracks about Sixties color painting and Helen Frankenthaler.

The Guggenheim is in the process of changing its primary exhibition on the ramp (farewell, Countryside!), so the museum discounting its admission price for this terrific color show and other shows in its smaller galleries.

Be sure to see Marking Time: Process in Minimal Abstraction, also open through March 15, which includes works by Agnes Martin and other kindred spirits. For fun, here’s a link to our album from Agnes’s 2016-2017 Guggenheim retrospective.

And if you want to read (and see) more color artistry in the collection of The Whitney and how NYC influences were being adapted by the new generation of contemporary Native American artists, read our review of the 2019 show at the IAIA Museum of Contemporary Native Arts in Santa Fe here.