Darryl McDaniels of Run-DMC talks with Kevin Burke at MCNY

Despite the massive nor’easter moving through New York, we’re assuming that the virtual NYC museum events are happening as planned – an opportunity get behind the scenes of New York’s hottest photography show, visit a West Coast design archive, meet a Rock legend, and dive into historic Southern cuisine.

Check the daily listings on our virtual events page to for these events and details on many, many others.

The Kamoinge workshop show at The Whitney. Meet the artists this week.

We want to alert you all to the upcoming opportunities that the Whitney is offering to showcase the photographers and work featured in Working Together: The Photographers of the Kamoinge Workshop. On Wednesday (February 3) at 7pm, you can meet the Kamoinge artists live and hear them talk about how Harlem influenced their work. On Friday (February 5) at 3pm, see which artists used “the body” for inspiration and which contemporary photographers take on similar themes.

Two tours of the Morgan’s David Hockey show this week.

Also, just a reminder that there are two opportunities to walk through the Morgan Library’s David Hockney life-drawing show – on Wednesday, February 3 at 3pm and on Thursday, February 5 at 12:30pm.

Here’s how the rest of this week will shape up, with just a few suggestions (see the entire list here):

On Tuesday (February 2) at 4pm, take a trip to California with the Poster House to hear Letterform Archive’s Stephen Coles talk about (and show examples of) what happens when graphic designers break the rules of what typically constitutes good design.

Close-up of Swiss grid at Poster House. What happens when designers ignore it?

At 7pm at the Museum of the City of New York in the Your Hometown series, meet Rock and Roll Hall of Famer Darryl McDaniels of Run-DMC who will talk about growing up in Queens during the Sixties and Seventies and how the lessons learned contributed to becoming a rap icon atop the music industry.

On Wednesday (February 3), you can join two programs that take you inside museum collections and exhibitions to ask questions about how indigenous cultures and artists are represented, and what is changing.  At 6pm at Bard Graduate Center, hear about “Indigenous Arts in Transition” from two Native American curators in Minnesota and Oklahoma. 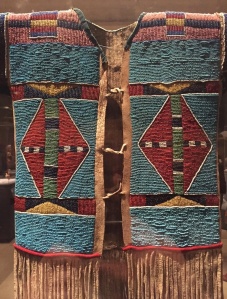 At 7pm, join the SciCafe crowd for a talk and Q&A on “Museums and Race” at the American Museum of Natural History that has a long (and current) history of grappling with these issues. Anthropologist Monique Scott will focus on African objects in the collection in New York and other museums around the world.

At 8pm, join the Museum of Food and Drink (collaborating with the Smithsonian Folklife Festival) for a fun dive into regional cooking in “Sustaining Gullah Geechee Cooking across Land and Sea.” You’ll hear a fascinating migration story told through food and learn how to make crab fried rice.

There’s a lot more music, science, and get-togethers, so check the complete schedule. Most of the events are free, but it’s always nice to add a thank-you donation.

We dropped in on fun virtual events last week at the AMNH, Fraunces Tavern Museum, and the NYPL’s discussion with Amber Ruffin, and couldn’t have enjoyed them more!

The Toxic Titan show with the Hayden Planetarium crew had nearly 400 viewers from around the world!  Congratulations to the virtual team, who even un-muted everyone to give the crazy-good speaker a live round of virtual applause! 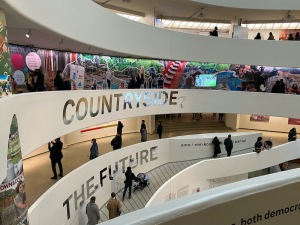 Get to the Guggenheim by February 14!!

Before the storm hit, we were able to visit the Guggenheim to see Countryside, the Future, the spectacular show by AMO/Rem Koolhaas. Although the curators say you can either breeze through or read through it slowly, the crowds were definitely making the most of their time and digesting everything – the history of our obsession with country and leisure, the ways 20th-century leadership tried to reshape vast swaths of their countries, and the efforts going on today to reimagine non-urban environments in Africa, the Middle East, the Arctic, and everywhere.  It’s a must-see. Two more weeks.