He wasn’t an artist, but MoMA has given him a show that has everything – joyous post-Impressionist canvases, Moulin Rouge posters, color wheels, African masterworks, Italian futurists, street riots, manifestos, explosions, and mug shots.

Félix Fénéon: The Anarchist and the Avant-Garde – From Signac to Matisse and Beyond, an exhibition on view through January 2, will introduce you to a writer, critic, anarchist, and dealer living in turn-of-the-century Paris who championed Seurat, gave Matisse his start, coined the term neo-Impressionism, and went to jail for a few months after he was accused of setting off a bomb in a restaurant frequented by government big shots. 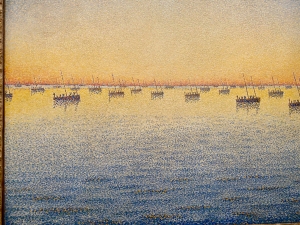 This gorgeous show was inspired by Signac’s pointillist portrait of Fénéon, which features swirling color wheels referencing their shared passion for Japanese design, pattern, and the science behind art. Books and ephemera by influential color theorists are displayed nearby, but it’s hard to keep your attention there when paintings by so many modernist masters are vying for your attention around every turn.

Fénéon used his critical bullhorn to turn many artists into household names. Think Seurat and Signac, two of Fénéon’s early favorites. The first gallery is full of their beautiful seascapes and figurative work. Read the curator’s essay about the artists he promoted, and see our favorites in our Flickr album.

The curators let us know that these peaceful images and exuberant dance-hall posters were made at a time of serious social unrest and profound economic hardship for working-class Parisians by interspersing Fénéon politics-charged writings and socially conscious works by Vallottin and Pissarro.  Disruptive protests, nightlife, zines, and art all went hand-in-hand during the 1890s.

Fénéon spent several years as the editor-in-chief of a leading avant-garde journal, orchestrating contributors such as Bonnard, Toulouse-Lautrec, and Vallotton, and collecting their work along the way.  So, it came as quite a shock to everyone when the independent critic announced that he was taking a full-time job with a prestigious but conservative gallery in Paris.

Entering the second gallery of the exhibition, you see immediately how Fénéon used his notoriety and avant-garde chops to build up a contemporary art business and lure old-line clients into taking a chance on something new and modern.  He signed contracts with artists he had long championed, and gave an up-and-comer named Henri Matisse his first show in 1910. 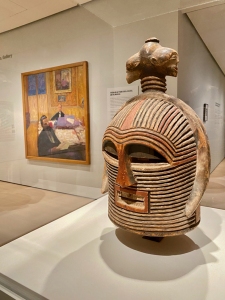 It’s exciting to see a room full Matisse’s early work (including three that were in that initial show) and work by other artists that Fénéon both collected and sold, including a wall full of ethereal Seurat drawings.

Like many others in the avant-garde, Fénéon was a passionate collector of art from Africa and Oceana, and it’s thrilling to see so much of his original collection – now scattered throughout the world – reassembled inside MoMA.

Fénéon hated colonialism and railed against calling this portion of his collection “primitive art.” He lamented that the names of the artists who created such dynamic, inventive work were unknown and disliked having such evocative pieces relegated to ethnographic museums.

He hoped that one day “art from faraway places” could take its place in the art pantheon right up there with works in the Louvre.

It’s satisfying to examine dramatic, powerful sculptures and masks from Burkina Faso, Côte d’Ivoire, and Democratic Republic of the Congo against the backdrop of Modigliani, Matisse, and Italian Futurist paintings.

The worlds of ancient mythic power, modernism, and emotive color seem to be spending their time at MoMA having an active conversation – just the way Fénéon would have wanted.

And now meet MoMA director Glenn Lowry and Starr Figura, curator of the exhibition, who show works from the exhibition and discuss why they mounted this show:

If you can’t get to MoMA, listen to the audio guide here, and enjoy the “colors”  playlist that MoMA designed.