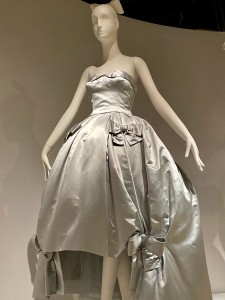 Walking through the Costume Institute’s show, In Pursuit of Fashion: The Sandy Schreier Collection, closing September 27, you can feel the care and attention that Sandy gave to choosing exquisite fabrics and impossibly precise handwork in the pieces she chose for her archive.

The dresses and accessories that Sandy’s chosen to donate to the Met are pristine – a tribute to her true love, appreciation, and care for couture masterworks. She didn’t collect to wear the clothes, but to preserve and admire them as genuine works of art – duchess satins, intricately painted velvets, and incredible beadwork from the best French embroidery houses. Take a look some of the details close-up in our Flickr album.

The beautiful show opens with an array of postwar couture by superstar designers Dior, Balenciaga, and Saint Laurent alongside creations by less shown couturiers, such as Jean Dessès and Jacques Griffe. It’s a joy to behold Sandy’s reverence for sumptuous fabrics and dramatic silhouettes.

It’s equally exciting to encounter lavish early 20th century gowns and discover new names, such as Madeline & Madeline or Jean Victorine Margaine-Lacroix, who were blazing the trail for a new kind of liberating dress for women at the same time that suffragettes were marching to gain the vote. Sandy’s gift brings these ground-breaking female designers into the Met’s collection for the first time, too.

The show also calls attention to at-home ease and glamour of the Thirties from innovative, sought-after American female designers – a tea gown of simplified perfection by Jessie Franklin Turner (who Poiret called “a genius”) and a virtually sheer dinner dress by Valentina created from layers and layers of netting. 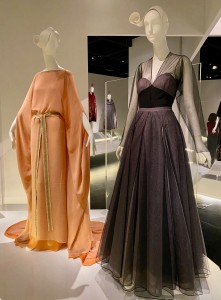 Both pieces show masterful construction, nearly invisible handwork, and style that enabled an understated hostess to sweep through her own private event like a movie star.

The back of the gallery showcases some of Sandy’s earliest acquisitions – nearly a dozen coats, dresses, and capes from the Twenties by two legends of textile magic – Fortuny and Maria Monaci Gallenga. Each had their own secrets techniques for applying intricate, metallic Renaissance-inspired patterns on lush velvet and silk. The creations are a master class in artistic dressing.

Many couture feats demanding close examination are encountered in the third major portion of the show – delicate flowers on a tulle dress by Vionnet, diaphanous, layered embroidered chemises by Boué Soeurs, and sparkly flapper dresses by Poiret and others that are beaded beyond belief and look as if they were made yesterday.

1925 lame and lace dress by Paul Poiret and 1925-28 evening dress with paillettes, beads, and crystals

There’s a tongue-in-cheek gallery with Sandy’s collection of sartorial puns from the Eighties by Stephen Sprouse and Patrick Kelly, alongside and fool-the-eye hats and accessories by Stephen Jones and Philip Treacy. (Turkey feathers painted to look like butterflies, anyone?)

Alongside a watercolor portrait of Sandy, there’s another hint to what her collecting will add to the Met – a works-on-paper collection from the early 20th century, featuring pen-and-ink illustrations that were how fashion houses showed their clients what each season had to offer. It will be exciting to see more from the print portfolio that Poiret created with star illustrator Georges Lepape for his best clients.

Enjoy this brief glimpse into a space where Ms. Schreier’s gift provides beauty, delight, and reverence for masterful makers around every corner.

4 thoughts on “Couture Nirvana at The Met”