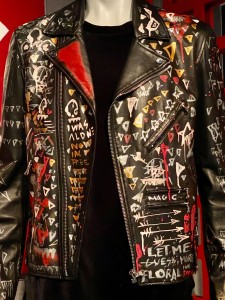 Although the doors to the museum exhibition are shut tight, the Museum at FIT still allows full access to its spring show Power Mode: The Force of Fashion through its online exhibition.

The power of resistance and how clothes convey the message are among the themes explored. Hand-crafted items such as jackets slashed with anti-racist graffiti, T-shirts silkscreened with bold words, and pink pussy hats are shown (and discussed) alongside high-end designer appropriations of messages, causes, or culture.

The exhibition presents actual 19th– and 20th-century uniforms – templates of precision, force, and authority – next to creations in which high-fashion designers channel this concept of “power” through military colors or styling. 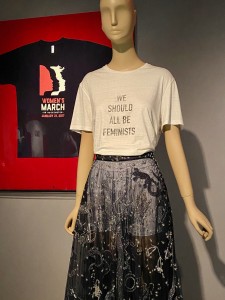 The show explores examples of economic power via “status dressing” over three centuries and shows how the authority of a man’s traditionally tailored suit was adapted to white-suit statements by women showing power – not only by the marching and protesting suffragettes of the last century, but also by the current crop of female politicians in the United States.

Take a close-up look at the details in our Flickr album and read more about individual items on the show’s website.

Curator Emma McClendon gave a lot of thought to the visual cues, economic issues, and shifting societal backdrops for as she selected the items for this show.  Join her on a walkthrough to find out what lies beneath the surface of everyday, extravagant, and elemental clothing choices : 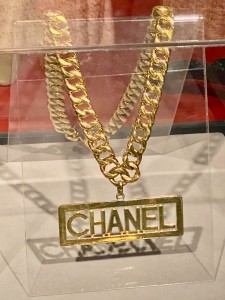