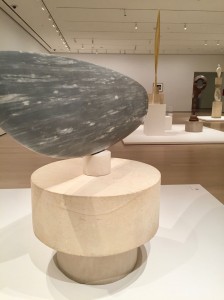 MoMA is taking a four-month break while it reinstalls its collection in its expanded 53rd Street home. For nearly a year before it closed its doors, MoMA provided a beautiful gathering space devoted to a much-loved modern master in a beautiful show Constantin Brancusi Sculpture.

Always packed with admirers, you could frequently hear visitors that turned the corner and entered the gallery exclaim, “Wow!”

There they all were – Brancusi’s marble The Fish sculpture that seemed to be swimming, the soaring Bird in Space, and the primal tall oak Endless Column. 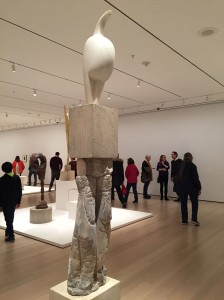 1910 marble Maiastra, a mythical Romanian bird with a pedestal created from another sculpture

Everything was drawn from MoMA’s expansive collection. Every viewpoint joyfully represented what contemporary audiences love about Brancusi’s work. View it in our Flickr album.

Hard to believe that the epic Maiastra was created in 1910 or that this innovator grew up as a woodworker in the rural Romanian countryside and walked across the continent to relocate to Paris to be where the early modernist practice and philosophy were percolating.

For a fun look at how it all began for Mr. Brancusi, watch the film that MoMA created using footage shot by his buddy, Man Ray here and also listen to a jazzy playlist of Brancusi’s favorite songs and atonal orchestral hits of the day.

Brancusi’s work is the epitome of Modern to the contemporary eye, but it wasn’t always that way. One of the most beloved pieces in the room was initially considered a blasphemy to art when it was first exhibited in the 1913 Armory Show in New York.

Listen to MoMA tell the story: