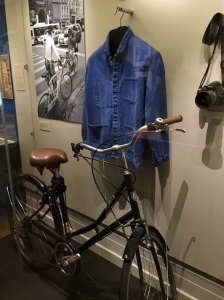 Bill Cunningham’s stuff isn’t going anywhere.  It’s going to stay right inside the New-York Historical Society, a tribute to the man that made “as seen on the street” a go-to source of what’s happening in style on the sidewalks of New York.

To celebrate its acquisition of Bill’s photographs, letters, and personal mementos from a life spent documenting clothes, people, and fashion, the NYHS has populated its second-floor micro-gallery with his early hat designs, his own instantly recognizable blue jacket, and his Nikon in Celebrating Bill Cunningham through September 9.

Take a look at some of the show’s highlights here.

The NYHS show features hats and dramatic evening hair ornaments that Bill designed under his own label after he arrived in New York, back in the Fifties. It’s a piece of his life story that few know, so it’s nice to see the fantastic feathered “wearable art” that delighted his clients. His summertime Hamptons shop sign is even preserved here.

When women stopped buying hats in the Sixties, he switched careers to fashion journalism, first for Women’s Wear Daily, then as a stringer for big-city papers throughout the country.

Bill began taking photos at fashion shows in 1966, and soon embarked upon a fun project – finding interesting building facades around the City, getting period clothes that matched the building’s year, and asking friends to pose. Here’s our Flickr album of a few spectacular photos from this project, which the NYHS showed in 2014. Read our coverage here. 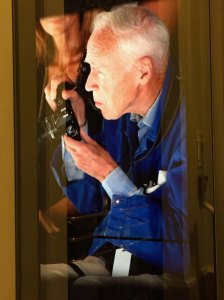 The work for which Bill is best known is tucked into a little case – his work for The New York Times — the photo-mosaics that Bill assembled from the candids he shot.  Society types, people going to work, edgy downtown twentysomethings – they were all part of Bill’s mosaic. Real people showing real style.

One day it might be black-and-white polka-dots spotted around town; another day, the story might be bright yellow. If there was a particularly severe streak of hot, cold, rainy, or windy weather – particularly during Fashion Week, Bill would show us the person-on-the-street fashion and gear solutions that he admired most.

Everyone became used to people-watching through Bill’s eyes and lens.

2009 coverage in The New York Times

Anyone planning a high-end charity event in New York sat on pins and needles on the night of the event, hoping “Bill would make it” and anxiously asking others on the committee, “Has Bill arrived?” If he did, you could breathe a sigh of relief, knowing that your friends and charity cause would get some real estate in the precious pages of The New York Times.

Always low-key, Bill often bicycled to two or three events in one night, quietly snapping pictures and then heading off to see which ones were the best.

Steady streams of gallery goers have been popping into the tribute show to get close to a legend who held a unique place in the New York social and fashion scene. All day long, people are sitting at the far end of the gallery, quietly watching the documentary and listening to this humble icon speak for himself.