It’s easy to think that that prehistory in America is all about the grand architecture of the Mayans, Incas, and Aztecs. But the National Museum of the American Indian wants you to think differently.The current show at NMAI’s Customs House in New York, Cerámica de los Ancestros: Central America’s Past Revealed, on view through May 20, takes you deep into the rain forests of several countries to show how colorful clay pots reveal a rich story of artistic complexity, style, and cross-cultural trends.

The achievement of the show – a multiyear exhibition that began its run at the NMAI in Washington, DC in 2013 – is telling a story through the humble material that nearly every village home knew how to shape. The everyday nature of the items stands in sharp contrast to the Metropolitan Museum of Art’s current Golden Kingdoms show that focuses on the luxury trade.  Yet, it tells a similar tale. 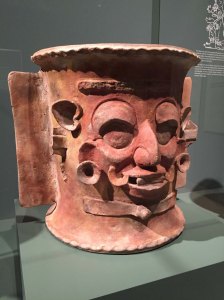 NMAI took a ground-up approach to uncovering history, focusing on six relatively unknown sites where discoveries are being made by universities and students in Belize, El Salvador, Honduras, Nicaragua, Guatemala, Costa Rica, and Panama.

The focus is on the pottery, although you also see jade pendants that the Mayans threw into cenotes as offerings in Guatemala and upscale gold and spondylus shell necklaces excavated in Panama’s Greater Coclé sites.

The show emphasizes the style that each cultural group brought  –Mayan incense burners from Guatemala with dramatic portraits of the rain god Chaac, storytelling painted vessels from Honduras, and vessels, plates, and icons depicting monkeys, tapirs, vultures, frogs, and birds of the surrounding rain forest.

The sites where these clay treasures were found functioned primarily as agricultural villages, not grand palaces; however, many sites show paved roads leading in and out.

The artistic and archeological evidence makes it clear that local artists were adapting and interpreting the lore, myths, histories, and styles picked up along the bustling trade routes through Central America, where birds, jade, gold, cacao, and humble pots were being traded, used, and refashioned. 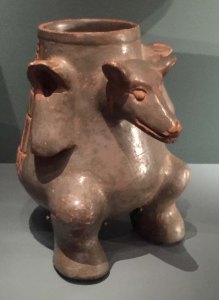 Lempa River artists from El Salvador near Palacio, Cuscatlán made armadillo pots and lots of other animals (AD 900 – 1200)

You don’t often link ancient pottery and mass-market production, but at least one case shows a ceramic mold from El Salvador that was used by the artist to crank out Mayan-style pendants about 1,500 years ago.

There’s also a case showing how pottery stamps were used to embellish textiles even further back in time. These stamps are from Honduras and Costa Rica, but you can be sure that techniques to make your everyday cotton tunic a little nicer was fairly widespread.

View some of our favorite items on our Flickr album.

The introductory gallery of the show describes some of the early archeological activities in Central America, which were often spurred by the powerful agri-businesses (e.g. United Fruit) that set up shop in Central America in the early 20th century.

Examples of how pottery stamps were used to print fabric since 300 BC. Here, a Honduran monkey stamp and two others from Costa Rica.

The show makes the point that the next wave of amateur treasure-hunters in the Sixties and Seventies swept a lot of the archeological finds out of the county and into US and European museums.

Today, however, the NMAI salutes the universities, professors, and students throughout Central America that are discovering ancient histories in their own backyards and developing the scientific skills to contribute to the scientific dialogue about the past.

The show leaves you with a sense that the discoveries are just beginning. Watch this video and travel deep into the rainforests and meet the next generation of Central American archeologists on the cusp of making new discoveries:

Download the catalog here to see maps of the area and get to know more about bustling prehistoric cultural production centers you never knew, like the Ulúa river valley in Honduras and the vibrant Gran Cocle in western Panama.