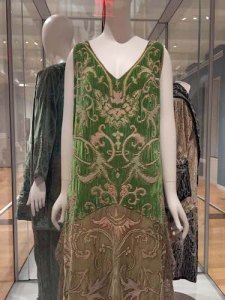 Booze-filled nights, cocktail artistry, designer scents, dancing the night away in half-hidden clubs, and high style provide the context for the Cooper-Hewitt’s gigantic show, The Jazz Age: American Style in the 1920s, closing on August 20. If you go, plan on spending some time contemplating two floors of beautiful things that made this decade a design stand-out.

From the time of New York’s first Armory Show in 1913, the appetite for primitive art, artistic dressing, and design innovations just kept growing. The end of World War I encouraged German, Austrian, and French designers to look west to find new markets and clients, and New York in the Twenties was ready for something completely different.

As the curators show, the trans-Atlantic influences, designers emigrating to New York from Europe, and newly liberated women enjoying the cigarettes, cocktails, music, and dance all added up to an explosion of change. 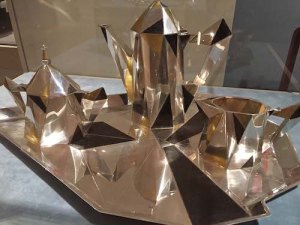 The Twenties became a watershed decade for innovations in fashion, jewelry, furniture, art, and design on both sides the Atlantic. View all the beautiful things in the show here.

The two-floor show is grouped by theme, chronicling the initial cross-pollination of new European designs into high-end American lifestyles and choices – modern geometric designs in diamond bracelets, hair bands replacing tiaras, cubism gone wild, the De Stijl and Wiener Werkstätte revolutions in design-think, and how everyone was interested in Frank Lloyd Wright. 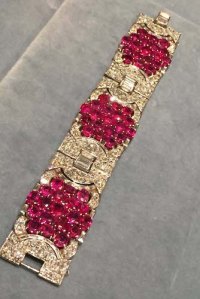 New York high society could not get enough of the meticulous craftsmanship and new geometries in design emanating from Europe. If you had the cash, you traveled to Paris to scoop up designer duds and art glass, but the appetite for what each continent had to offer was a two-way street: Europe could not get enough of Josephine Baker, jazz, and New York’s new, ever-expanding skyline. The Jazz Age is loaded with vases, armchairs, and even a wastebasket drawing inspiration from super-tall buildings sprouting in Manhattan.

The show also highlights the craze for “primitive” elements of design, Egyptian motifs inspired by the discovery of King Tut’s tomb, and the stuff that started to be made when party goers discovered the joy of cocktails.

There are fabulous bracelets from Cartier worn by high-society style makers and celebrities (e.g. Mae West, Gloria Swanson) and perfume containers that doubled as collectible art. 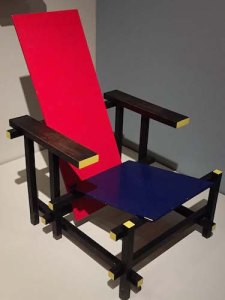 Couturier Jean Patou even commissioned a perfume presentation styled to look like a cocktail bar as a wink to the fact of Prohibition on the other side of the Atlantic. Of course, he offered ladies’ drinks when they came to his Paris salon, commiserating about alcohol deprivation in America.

The array of armchairs that have been assembled are a mini-exhibition on their own – from Gerrit Rietveld’s astonishing 1918 primary-color chair to Breuer’s iconic 1925 Barcelona chair to the 1929 steel-tube-and-rubber chair by René Herbst. It’s hard to look at them and see them as from an era different than our own today.

The curators make the point that a watershed moment in design was the 1925 Paris Exposition of International Arts. The excitement over the new designs was so intense that department stores in the United States offered to hold a traveling exhibition of 400 objects. After people across the US got a whiff of what new style was all about, the appetite for modern furniture, vanity table items, and textiles exploded. 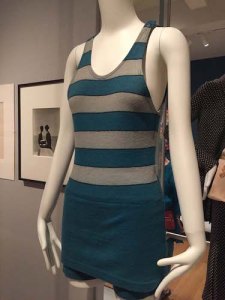 Clothing plays a role in the show, but the displays include more accessories and jewels. Beautiful evening dresses by Chanel and Callot Soeurs are featured, along with a pair of exquisitely preserved sparkly dancing shoes and a modern knit bathing suit that really revealed all of a woman’s curves.

Touring the show, you’ll learn how jewelry changed with the times during the Twenties. Shorter, looser-fitting dresses on ladies moving to the latest dance styles demanded longer, looser necklaces, or sautoirs, that swung in time to the music, too. More open T-strapped and ankle-strapped shoes were embellished to make those dance moves even more dazzling.

There’s a lot to the fashion story during this decade. Join two fashion historians and Cooper Hewitt curators, as they talk about the fashions of the Jazz Age in New York and Paris.