Jazzy colors and Pop Art fun are run amok in the joyful Americana tribute Stuart Davis: In Full Swing at the Whitney Museum of American Art through this weekend. The Whitney curators have 75 of his best, extending back to the Edison lightbulb years, but mostly from Davis’s post-1950s output.

You’d never know from the flat-out modernity that this Whitney favorite had his start in the Armory Show era in New York at a time when The Eight (Ash Can School) still ruled. In fact, at 21, he was the youngest painter to exhibit in the Armory Show, encouraged by his teacher, Robert Henri, who impressed him with the need to depict everyday life in his art.

But the exposure to the European avant-garde was profound. As you walk through the gallery, you see and feel his exhilaration about how the European upstarts were shaking things up.

Picasso and Matisse inspired Davis to start depicting everyday objects with a flattened, multiview twist. He used packages of Lucky Strikes, Edison lighbulbs, and eggbeaters instead of absinthe glasses, interpreting them on funnily upturned tabletops.

Gertrude Vanderbilt Whitney, who founded the Whitney in 1931, was a fan. She included his work in a group show in 1915, welcomed him into the Whitney Club in 1918 (alongside Edward Hopper and Mr. Prendergast) and facilitated the talented Davis’s sojourn to Paris ten years later.

When he returned to New York, he repaid Gertrude in paintings – just the beginning of The Whitney’s portfolio of his work. Captivated by the magic of movies, the birth of radio, and air travel, technology seemed to be transforming America. 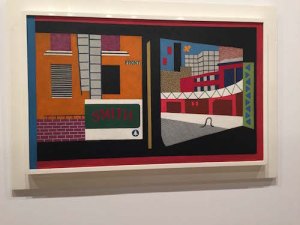 House and Street (1931) with two simultaneous views of Lower Manhattan.

He went on to experiment with simultaneous city views, jamming the Third Avenue El into corners of lower Manhattan where it really didn’t belong. All was fair in the jazzy, roaring New York Twenties.

Stuart struggled financially through the Depression, but not artistically. Inspired by improvisational riffs in jazz, he created canvases using line as music, twisting real objects and landscapes into primary-color layerings that remained flat as a pancake.

Twisting and turning ribbons of color pre-dated Mr. Pollack’s all-over style by at least a decade. The centerpiece of the show is an all-over mural, “Swing Landscape”, that twists Gloucester fishing schooner masts into a kind of “Broadway Boogie-Woogie”. This flat-style masterpiece was way too energetic for the WPA Art Project, which declined to hang it in the subsidized Williamsburg apartment complex for which it was intended. Thankfully, it’s in the place of honor here.

When he saw Matisse’s big-size cut-outs in 1949, Davis was inspired return to his roots. He focused on unexciting, everyday objects but added brand names and super-sized everything. Way before Warhol, Davis was doing improvisations with Champion sparkplugs and matchbook covers, toying with color, gray, and repetition.

Did Davis pave the way for Pollack’s all-over approach and totally branded pop-art masters of the late 20th century? Take a walk through the Whitney, admire the output of one of Gertrude’s favorites, and decide for yourself.

Check out some of our favorites on our Flicker album.

See the show at The National Gallery in Washington, D.C., running November 20 through March 5, 2017.