Bronze She-Goat, 1950, who usually lives outside in MoMA’s garden.

To mount the blockbuster Picasso Sculpture show, closing February 7, MoMA cleared out Andy, Roy, Jasper, and all the Judds from the Fourth Floor and let in an array of whimsical animals, personnages, and concoctions. If you couldn’t get in the front door of the show or were discouraged by the crowds, take a look at our favorites in our Flickr album.

The surprise is that every one of the dozen or so galleries is filled with the most delightful Picasso creations. You don’t really need a guidebook or an understanding of the history of modern art. You can just look and smile. Just like Picasso did.

Even he needed a break from his Blue Period, and the first gallery shows two little wooden “dolls” carved in 1906 – a response to Gauguin’s shockingly primitive Tahitian wood carvings that rocked Picasso’s world when he encountered them in gallery. Rough, painted, angular, and shamanistic – a good way to work out the creative kinks at the same time you were creating the Demoiselles downstairs. Pure primitive…no gallery guide needed.

Carved wooden Doll inspired by Gauguin, 1907. From Gallery of Ontario.

Next door (directly upstairs from the gallery where the Demoiselles hold court), Picasso’s having his fun with his crazily patterned and painted bronze absinthe glasses, spoons, and fake sugar. The curators have gathered together enough from different collections to have a party. Cubism with a twist of polka-dot fun.

Next, it’s monumental heads carved from plaster. Why do they all seem to be in on a joke? It’s the room where Andy and Roy’s Pop masterpieces usually hang, but Pablo’s big, bulbous curvy heads from the 1930s are just as wry and enjoyable. (See the videos below.)

Already declared “degenerate” by the Nazis in 1937 and featured in their historic touring show, Picasso had his own quiet joke on the oppressors as he lived through the occupation of Paris in 1940-1944. While the Nazis were melting down bronze statuary in Paris to use in their war manufacturing, Pablo somehow managed to sneak into a foundry to make a big, bronze sculpture of large kitty cat on the prowl and other metal works. 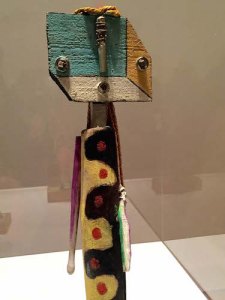 Figure, 1938, made of found stuff — wood, nails, and screws with string, wire, and hardware

The kitty, the bicycle-handlebar bull, and the napkin dog are just two among a host of lots of other contraban he defiantly created before liberation.

The rest of the galleries show how Picasso’s wartime scrounging spurred him on to new heights of making something out of nothing and finding delight in transforming somebody’s junk into funny, fool-the-eye sculptures. The She-Goat (usually found hanging outside in MoMA’s garden by The Modern), the car-baboon, a metal owl, goose, and other creatures hold court in the bigger galleries.

Well-wishers crowd around taking feel-good photos and parents show the kids how the artist took everyday objects and turned them into such fun critters.

The stick-people Bathers at the finale are partially made of pieces of painting frames and other found wood, painted and finished with the same rough technique and hand that characterized the “dolls” in the first room. It’s the great Modern Master going rogue channeling outsider art.

The Bathers, 1956. From the Staatsgalerie Stuttgart.

By the time you get to the model of the monumental head that’s become one of Chicago’s icons (in the last gallery), the crazy sculpture — Picasso’s last —  feels  kind of normal.

It’s telling that MoMA didn’t even put label copy on the stuff. Just a guidebook you can pick up at the entrance, or not. No wonder it’s been the most popular show in New York.

Just when you thought understanding modern art was “hard”, one of the masters comes along, kicks sand in your face, laughs, invites you to do a little beachcombing with him, throws a few sticks together, and asks you to look at what’s right around you in a new way.

Look at a few pieces that MoMA underscores with delightful music.

2 thoughts on “Warhol Moved Out So Picasso Could Play”