If you climb up to the second story of the New-York Historical Society to see Audubon’s birds, grab the magnifying glass right inside the gallery door. See the magnificent details painted by the watercolor master of all time in  Audubon’s Aviary: The Final Flight (Part III of The Complete Flock), running through this weekend.

NYHS is the lucky owner of every watecolor JJA produced to make his historic Birds of America subscription project in the early 1800s, which documented over 700 species. 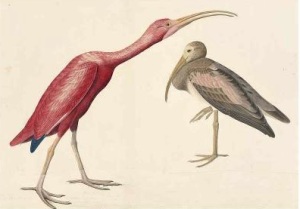 The watercolor collection – from which engravings were made – is so large that NYHS had to split the exhibition into three parts. It’s a joy to look at the life-size paintings that Audubon produced through the magnifying lens, seeing the tiny brushstrokes on lush feathers and miniscule detail on the small hummingbirds.

Paintings featured in all three shows are hung in the sequence that JJA painted them. Although JJA traveled extensively throughout the East and South, he never actually saw birds west of the Missouri in the wild.

By the time Audubon began cranking out the watercolors needed for his final installment of his masterwork, lots of new birds were being discovered out West. Scrambling to keep up – after all, he committed to documenting every American bird – he accessed specimens collected by recent Western expeditions, Lewis & Clark’s trove, and other American specimens archived in Europe.

He holed up in Charleston, South Carolina in the winter of 1836 and worked, worked, worked to finish all the watercolors, which would be shipped to Mr. Havell in the UK for engraving.

How did Mr. Auduon’s studio work compare to the real thing? See for yourself in this bird-watching documentary shown inside the gallery. The birds featured are from the previous installation of the exhibit, including the rare, rambunctious Prairie Chicken at 1:25.

For more, go to the show’s excellent website, explore some of JJA’s works in more depth, and listen to the bird calls for the exhibition, courtesy of the Cornell Lab of Ornithology.