It’s unlikely that you have any of this sought-after designer’s pieces accompanying your best table setting or that the MAD Museum has any of his hand-blown, molded glassworks in their collection.

Two thousand years before ABC Carpet began retailing high-end home goods on Broadway and Martha Stewart branded her at-home lifestyle line, a Mediterranean craftsman in Sidon, Lebanon (then Phoenecia) created a line that every aspiring tastemaker in the Roman Empire just had to have. The Metropolitan Museum of Art pays tribute to his output in Ennion: Master of Roman Glass, on view just off the Greek-Roman study galleries through April 12.

Who needs old-fashioned metal cups or pottery jugs on the well-laid Roman table when Ennion was creating stunning cobalt-blue and transparent glass equivalents? 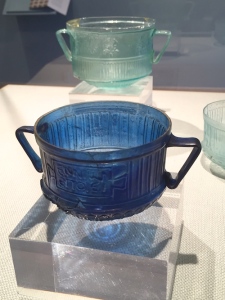 Ennion’s workshop was on the cutting edge of a manufacturing-and-craft revolution – blowing glass into decorative molds (which took the guesswork out of creating place settings for four, six, or ten) and exporting sets for sale throughout The Empire.

Ennion’s competitors were doing the same, but Ennion of Sidon had the big brand emblazoned on his work, working it into the design in the same way that MK, DKNY, DVF or YSL do today. His logo was written in Greek, the universal language of the first century: ““Ennion made me/it.” Scholars reckon that it was all made and exported from Sidon, a first-century glassmaking powerhouse, since none of Ennion’s molds featured a bilingual brand.

After two millennia, only about 50 of Ennion’s gorgeous works remain, and the Met’s show has assembled about half that amount from its own collection (courtesy of master-collector J. Pierpont Morgan), the Corning Museum, private collections, and other museums of antiquities in Israeli and Europe.

In addition to Sidon, Ennion’s output has been found in excavations of ancient homes in places as far flung as Jerusalem, Croatia, Italy, and Spain. The Met’s team has had fun displaying glassware from identical molds next to one another, despite the fact that pairs were discovered thousands of miles from each other at different archeological sites.

Check out the Met’s beautiful tribute to a master artist on our Flickr feed.

1 thought on “Ennion: Luxury Tableware at The Met”