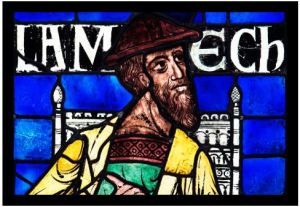 If you’ve never gotten to see Canterbury Cathedral, pop into Radiant Light before May 18 to see six magnificently restored Romanesque windows from this historic site, installed appropriately in the Romanesque Gallery near the entrance of The Cloisters.

It’s the first time any of stained glass windows from Canterbury have left home, so it’s a unique chance to gaze upon brilliant, beautiful works designed and made in 1178-1180 and think about the fact that these were seen by Chaucer and millions of pilgrims who trekked to this site over the centuries. Maybe during your trip to the wilds of Fort Tryon Park in northern Manhattan, you’ll act out your own CanterburyTales adventure.

Phalech, one of Noah’s descendants, one of Canterbury’s original 86 stained-glass panels (1178-1780)

The Cloisters got the chance to display these medieval masterworks after a brief run at The Getty while the walls of the Canterbury Cathedral were being restored. Lucky us.

The backstory: After King Henry had Thomas Becket killed at Canterbury in 1170, word spread of miracles in 1171, the fastest canonization in history followed in 1173, and pilgrims began flocking to Becket’s former home. A fire in 1174 triggered Canterbury’s rebuilding and redesign, including the plan for an unprecedented series of 86 stained-glass windows to emphasize the connection of priests (versus kings) to Christ.

At the Cloisters, you will see six of the 46 surviving choir windows depicting the Biblical ancestors of Christ, as chronicled in the Book of Luke.

The patriarchs that you’ll meet uptown are Jared, a fifth-generation descendant of Adam; Lamech, the son of Methuselah and father of Noah, who lived during those sinful pre-Flood times; Noah, who appears to be talking to God; Phalec, who lived five or six generations after Noah; Thara, Abraham’s father who hailed from the ancient city of Ur; and Abraham himself.

Abraham with his border back around him again after 200 years

Several full-body portraits are reunited for the first time in 200 years with their original stained-glass borders, which mimic those of contemporaneous manuscript illuminations. Phalech’s portrait has a little less detail than the others, and the curators speculate that the artisans may have had to rush a bit to finish this monster-sized commission on time for the Archbishop back in 1180.

Spoiler alert: The faces of Thara and Abraham are 20th-century copies.

How were these painted? How were these  images made? The Cloisters points us the four-minute video below, created by London’s Victoria and Albert Museum to show how medieval artists created their magic.

Making a stained glass panel from Victoria and Albert Museum on Vimeo.

For other views of The Cloisters, see our Flickr album.