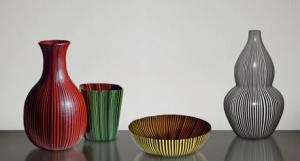 The gorgeous art and design show at the Metropolitan Museum of Art, Venetian Glass by Carlo Scarpa: The Venini Company, 1932–1947, is deceptive.

It’s a tribute to one of the top innovators in Murano glass, stepping visitors through more than two dozen styles and innovations that he brought to glass-making, but it also provides a brilliant introduction to the virtuosity that characterized decorative luxury items as far back as the first century B.C. See it before March 2. 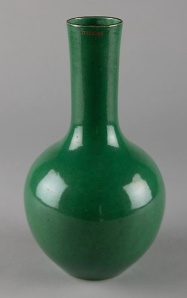 Scarpa, a trained architect, began working as an artistic consultant at Paolo Venini’s glass factory in Venice right after he graduated, but soon his creativity and vision catapulted him into the job of artistic director and into the spotlight with every new collection he debuted at the Venice Biennale.

At the start of the show, you’ll see his Bollicine group (1932-1933) with tiny air bubbles incorporated into each white, blue, black, and green piece. In awe of the artistry of Eastern Asia, he fused this modern technique with a reliance on traditional shapes from one of his favorite periods of Chinese porcelain – the Qing dynasty (1644-1911), where ceramic artists crafted bold, dramatic single-color works. Check. Let’s take a page out of that book and put it to use in creating sleek, modern icons of Italian design.

At the far side of the circular Lehman Wing gallery, the Met curators have put together a shelf that fools you from a distance. You’ll think that the gorgeously modern works are all opaque glass masterpieces by Scarpa, but only half are. The rest are beautifully arranged works from 18th and 19th century China from the Met’s own collection. 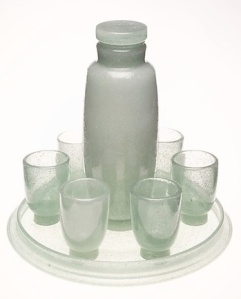 Venini and Scarpa felt it was important to document the specific silhouettes that they created, and the Met has matched the archive shape with many of the modern glass works in the collection.

Just look at each label and wonder what the 18th century Chinese ceramicists would think of their shapes being transformed into glass marvels.

Working your way around the gallery, you’ll experience astonishing artistry resulting from dozens of technical approaches – for example, glass with rough, irregular surfaces (Corrosi 1936-1938), glass blown from thin slabs made of alternating clear and colored glass rods (Mecca filigrana 1934-1936), boldly striped pieces, and iridescent glass (Iridati, 1940). The variety and effects are astonishing and it’s easy to float dreamily through this art for art’s sake show. 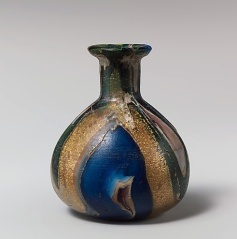 The curators also make use of the Met’s vast collection of ancient glass to remind modernists that the glassmaking tradition extends back nearly two millennia along the Mediterranean and Adriatic shores.

Be sure to look for the Met’s cast glass created in Greece between the 2nd century and 1st century B.C. and in Rome from the late 1st century B.C. to the early 1st century A.D. Glass was a super-high-end luxury item back in those days.

You’ll be blown away by how modern it all looks. 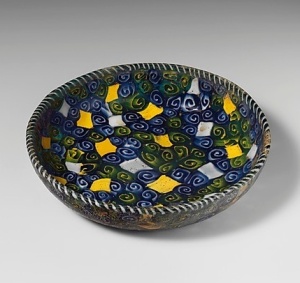 This mosaic glass dish may look like Italian 1980s, but it’s Greek from the 2nd-1st century B.C. Source: The Met

2 thoughts on “Exquisite Journey Through Time via Modern Venetian Glass”