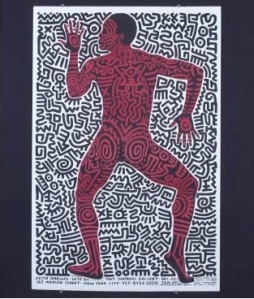 When you stand in line to get your tickets for The Armory Show at 100 at the New-York Historical Society, look up and you’ll see a piece of history from the era of Madonna and Danceteria right above you – the entire beautiful, embellished ceiling of one of the must-see stops during the raging Eighties club culture in NYC, Keith Haring’s Pop Shop as part of the special installation Keith Haring All-Over.

Although the Pop Shop closed its doors on Lafayette Street in 2005, it achieved worldwide pop-culture recognition for being the most iconic sites where art, music, dance, graffiti, celebrity, and the street mixed. Haring, whose Radiant Baby and other works ubiquitously plastered subway station walls in the 80s, decided to put Warhol’s commerce-as-art philosophy into practice. He created an art-filled shop downtown where the international art collectors, celebrities, club kids, and graffiti artists would feel comfortable.

Installation view of the Pop Shop ceiling over the cash registers at NYHS, right behind a video wall of Oertel’s Pulling Down the Statue of King George III. Courtesy: NYHS/John Wallen

The walls were covered in Haring’s instantly recognizable doodle-cartoon figures and stuff to buy, so when the Haring Foundation gave the ceiling to NYHS, it did so with the stipulation that it be hung somewhere where money is exchanged.  So, right inside the door in the same beautiful entrance hosting the treasures of Revolutionary New York, is the ceiling from a place where music blared, fun was had, all-night parties raged, and Downtown 80s life was celebrated.

Take the elevator to the Luce Center to see the rest of the show, which is on loan to NYHS by the Haring Foundation, which Keith established just before he succumbed to AIDS in 1990. Go to Keith’s website to see him in action in the subway, galleries, and performance and click through images of his amazing body of work in digital form by decade. It’s all here.

But back upstairs at NYHS, you’ll see Keith’s 1985 repeated-pattern design for a fabric run right above two NYC mile markers from the 1800s, a Haring-painted black-and-pink leather jacket (done with graffiti artist LAII), and Jeremy Scott’s Haring-inspired sneakers for Adidas. The NYHS is also screening some vintage video in the little 80s space, right next to the classical busts of New York’s 19th century high and mighty. Hang out to see Madonna’s 1984 performance of Dress You Up for the Keith’s Party of Life and the 1986 Grace Jones video I’m Not Perfect (But I’m Perfect For You), which Keith co-directed.

The show is tiny, but it’s a great little secret spot to time travel back to the Eighties. For more Keith, visit the Fales Library at NYU for Keith Haring: Languages through February 28 and NYPL’s Why We Fight: Remembering AIDS Activism through April 6. The NYHS installation is an open run.

Hey, and don’t forget to shop in the online Pop Shop, where revenue from (RED) items goes to combatting AIDS.