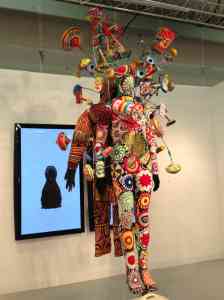 One hundred years ago, The Armory Show blew the roof off New York City as Matisse, Monet, Picasso, Seurat, Lautrec, Kandinsky and The Eight made history at Lexington and 26th Street. It was the beginning of Modern in America, and even Whistler’s Mother showed up.

This week, the 2013 edition of The Armory Show glamorized the West Side with its wall-to-wall extravaganza of modernist and contemporary sculpture, painting, and installation art at Piers 92/94. Take a walk-through of both shows via our Flickr photo feed.

Tributes to the original were in view in the Modern portion of the show, such as Munch’s intense woodcut Vampire II (1895-1902), as were edible Parisian imports from the Laudrée macaroon cart just inside the entrance. The show began right at coat check, where a few people were walking around carrying flattened-out versions of Andy’s Brillo boxes. Around the bend, there was the source: a silver chamber where the Pittsburgh’s Warhol Museum was inviting art-lovers to sit in front of a video camera to record a Warhol screen test. Obviously, the box carriers had claimed their 2.5 minutes of fame.

The Modern show featured a mix of new and old, but everything certainly looked fresh. People were even taking turns having their pictures taken with a large Basquiat painting at the Tokyo’s Galerie Sho Contemporary Art booth.

The Contemporary pier was filled with twice as much art. Although there were no actual performance installations on Saturday (as there were in last year’s show), two booths attracted lots of bystanders with performance videos – Marlborough’s Shade Composition video by Rashaad Newsome (evoking 80s Harlem ballroom voguing) and one of superstar Nick Cave’s soundsuit performances on a sharp, clean screen mounted right behind an actual, riotous soundsuit. (Be sure to catch his “horses” performing at Grand Central March 25-31 for Creative Time/MTA Arts for Transit.)

Other hits from the Contemporary pier (besides the champagne bar) included Tony Tasset’s snowman made entirely from inert material, right down to the bronze twigs and leaves (Kavi Gupta Gallery) and Kysa Johnson’s monumental recreation and embellishment of a Bank of America waiting room at Morgan Lehman, layered with the calculated, rational precision of Piranesi’s perspective.

Take a look, because it’s all being packed up and shipped back to Dusseldorf, Istanbul, Oslo, London, Paris, and Chelsea today.