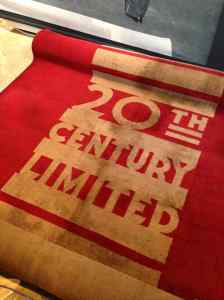 If you’ve ever wanted to see where the red carpet began, run over to 42nd Street and take a left into Vanderbilt Hall to gaze upon the plush surface upon which so many famous, fabulous, and acclaimed celebrities and moguls trod – the red carpet that was spread daily to the lucky ones who could afford to board the 20th Century Limited from New York to Chicago.

Docents give tours on the half hour, and they’ll tell you that the care taken with passengers right here at Grand Central was the origin of the phrase “red carpet treatment”. You’ll see an original destination sign, menus, and photos of the glamorous train (which will itself make an appearance at GCT on May 10-12). Take a look at the Flickr photos. 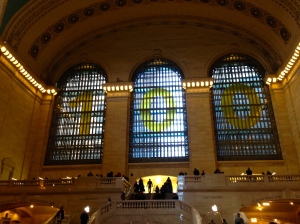 You’ll also be entertained by stories of the engineering, architectural, and pop-culture history of the terminal itself, and remember the stories about the chandeliers, stonework, ramps, and restoration every time you pass through. Get over to see all the memorabilia, trunks, engineering plans, and videos in person from 8am to 10pm daily before they are gone.

Some of the surprises are the “Ask Me” kiosks scattered throughout the hall, descriptions of how GCT changed the course of Midtown real estate, the story of how CBS and Walter Cronkite used to broadcast from here, and the size of that tunnel boring machine creating access for the LIRR to get into GCT 18 stories below. It’s all amazing, including the 1855 view of Midtown looking south from 42nd Street, lent to the show by the New-York Historical Society.

For a prequel, check out the NY Transit Museum’s historic timeline that lets you flip through online photos of various GCT incarnations since 1831. It’s really good, but not a substitute for seeing the red carpet, power-switch control panel, restored lamp post, and clips from movies that were filmed right where you’re standing. About 750,000 people pass through here each day, and from what we can tell, a lot of them are stopping to take a free 25-minute tour and check out the red carpet that started it all.