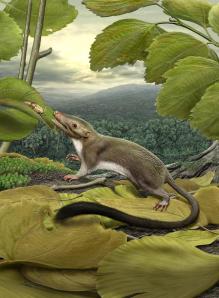 Who says dinosaurs get all the attention?

One of the big front-page science stories of the last few weeks is that a global team of researchers has mapped our ancestor tree back in time to a hypothetical small, furry critter that emerged just after the dinosaurs went extinct. The big news is that through a giant high-tech, data-crunching technique, 15-20 molecular-data scientists collaborating in six countries around the world figured out that the hypothetical ancestor to nearly all the mammals alive today emerged 200,000 to 400,000 years after the comet crashed to Earth 65 million years ago.

Ok, it wasn’t the first mammal (the ancestor to platypuses, opossums, kangaroos, and a lot of other extinct things came much earlier), but let’s applaud the American Natural History Museum for telling this story so clearly to a writer at The New York Times that it made it to the front page.

Column on AMNH Fourth Floor exhibit space that marks the spot where the virtual critter emerged along the evolutionary pathway in the Hall of Primitive Mammals.

At Thursday’s Social Media Week event on how to tell stories in science, panelists repeatedly emphasized how hard it is to make clarity emerge from a morass of data.  In a way, this “story about the rat” reached a social-media science storytelling trifecta: over 240 comments “about the rat” on the NYT web site, a neat little video that’s racked up over 11,000 views in just two weeks, and an exhibition layout for the vertebrate paleo collection on the museum’s Fourth Floor that lets you stand in the exact spot on the evolutionary pathway where this tiny hypothetical ancestor emerged. (See the photo with the Giant Sloth, to the left.)

Great job, AMNH and Stony Brook storytellers for giving us this video view into deep time, showing how MorphoBank crunches data, and creating another social-media star out of a virtual ball of fur.

PS: The fossil background talent in this video appears to be a model of Gobiconodon, an actual Cretaceous mammal from 110 million years ago who’s not directly related to the star of this show, but looks good on camera.