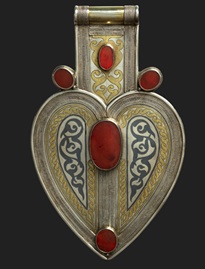 Take a peek at the accessories that two intrepid travelers spent years collecting in Central Asia and Iran – oversized jewelry that was so big they had to display it on a wall.  Now that Marshall and Marilyn Wolf have donated their collection to the Metropolitan Museum of Art, the Met has given it the star treatment, way up in that tiny magical Gallery 458 in the Islamic Art wing (which just welcomed its 1 millionth visitor a few weeks ago).

The dazzling show displays the 19th and 20th century creations of Turkmen craftsmen, whose ancestors roamed across Turkmenistan, Uzbekistan, Kazakhstan, and northeastern Iran.

Although Marshall and Marilyn Wolf collected jewelry and ceremonial objects of four tribal styles, the Met’s show spotlights Teke style from Merv, a Turkmenistan city-oasis that was a major hub along the ancient Silk Road. The collectors fell in love with the dynamic pieces – crowns, pendants, pectorals, armbands, rings, and long, vertical ornaments that flowed down braids on the backs of Central Asian beauties. Recent craftsmen may use glass instead of semiprecious stones and carnelian, but in all the vitrines on the Met’s second floor, you’ll see the real thing. 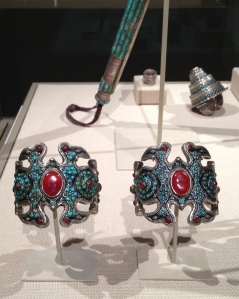 Take a close-up look at the Met’s spectacular collection photos. When you click on an image, the Met also shows you different views and similar objects from its collection.

Take three minutes to hear Marshall and Marilyn Wolf talk about their passion, how and why they began their collection, explain how their gift plugged a hole in the Met’s own holdings, and show more of their truly stunning pieces.  Keep an eye on that second-floor gallery for more to come.

1 thought on “How to Collect Exotic Oversized Jewelry”