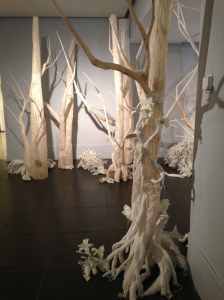 Tucked away in the Mezzanine Gallery on the second floor at the Brooklyn Museum is a valentine to the borough, its artists, and the support and love they received last September in Go: A Community-Curated Open Studio Project. It mixed trudging around Brooklyn, democracy in action, and high-tech to peer into other worlds right in our own backyard.

The museum commissioned an app, asked artists to open their studios, and invited the world to visit and vote for their favorites. (Apparently, it was inspired by an art competition organized out of Grand Rapids!)

GO tracked the art makers and art seekers – take a look at the “weekend activity heatmap” and the other GPS-gathered stats. The results showed a lot of love – 18,000 visitors making 147,000 studio visits to about 1,700 artists over a two-day period, or about eight studio visits per participant. See the raw data for yourself, broken out by neighborhood. Learn a bit more about the voters here.

Art lovers nominated 9,457 artists for a museum showing, and eventually voting and curators whittled it down to five spectacular representatives. Interestingly, four on display were born outside the United States.

Yeon Ji Yoo of South Korea, currently lives in Greenpoint and works in Red Hook. The large installation piece in the show is inspired by her grandmother’s fading memory. Listen as she talks about growing up in South Korea’s rural countryside: 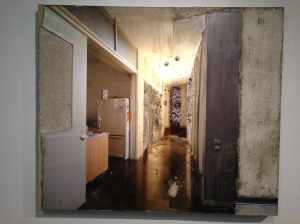 Naomi Safran Hon (of Prospect Heights) prints photographs of her hometown of Haifa, Israel on canvas; makes some cuts in the image; and pushes cement through lace to make a 3-D effect. She feels she’s working out the push/pull of the political and domestic realities of where she grew up. But let her tell you:

Meet the other artists, too: urban watercolorist Adrian Coleman, and painters Oliver Jeffers, and Gabrielle Watson. But if you really love Brooklyn, get over to experience the work in person, and add your comments. The museum’s open late on Thursday.

2 thoughts on “If You Love Brooklyn, Get to GO!”