How do you start over when life is disrupted, everything is rearranged, and the world seems upside down? How do artists respond? A quiet show at MoMA lays out the answers in 80 works in its post-WWII exploration, Degree Zero: Drawing at Midcentury, on view through June 5.

Drawn from the museum’s archive of works on paper, the show illuminates the ways artists were seeking new means of expression following the traumatic years of the world war – turning to contemplative traditions of Asian culture, channeling under-the-surface emotions through abstraction, embracing chance in the process, and trying processes that no one had tried before. 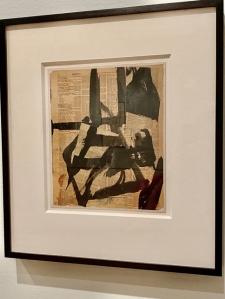 Visitors always seem to be taking the time to study each work and consider the ways each artist responded during a time of profound disruption, change, and promise. The works in the show, from across disciplines and continents, provide a contemplative window into the expressive ideas germinating between 1948 and 1961.

In occupied Japan, students were prohibited practicing traditional calligraphy, so the surviving artists, such as Osawa Gakyu, took it underground, producing 100% abstract work inspired by the brushwork and style of the ancient tradition. Since New York artists were gaining global attention with their spiritual and expressive abstraction, the Japanese artists wondered if putting a modern spin on traditional techniques could gain them an international audience. 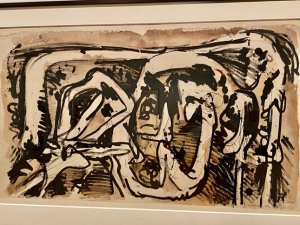 They formed groups like Bokujinkai (People of the Ink) and began publishing a journal, Bokubi (Beauty of Ink). They found an eager international readership among forward-looking European and American artists who felt it was the right time to incorporate cross-cultural influences into their art.

In 1954, MoMA showcased avant-garde Japanese calligraphy in a special exhibition that brought wider recognition to the reinvention happening overseas.

1957 drawing by Kenzo Okada, done seven years after his move to The Village

Some artists, like France’s Pierre Alechinsky, were up front in his enthusiasm for avant-garde calligraphy and traveled to Japan to study. Others, like Franz Kline, eagerly absorbed exciting techniques from the new movement, but kept his enthusiasm quiet to avoid stirring up still-simmering anti-Japanese sentiments. Chryssa simply applied calligraphic strokes to the grid-like columns of newspaper stock listings.

MoMA also shows that influences were a two-way street, citing Kenzo Okada, who ultimately decided to move from Tokyo to Greenwich Village in 1950, give up realist painting, immerse himself in the AE scene, and set up a long, successful career in America. The show features one of his acclaimed abstract works.

In the latter half of the show, there’s an emphasis on joyous marks, color and process – a trio of crayon scribble drawings by Cy Twombly, gestural drawings (like mini-paintings) by Jackson Pollack and Joan Mitchell, and intense pastels by Beaufort Delaney. There are lots of examples of how visual artists used humble, small-scale materials to channel complex feelings onto a page. Often the results look just as epic as their big canvases elsewhere in the museum.

1953-54 Tomb by Sari Dienes, a gravestone rubbing with a flag

The process section of the exhibition features music notations by chance-master John Cage, but also showcases highly engaging work by artists who aren’t as well known today. Sari Dienes loomed large in the downtown experimental (Black Mountain/Fluxus) art scene of the Fifties and Sixties, and the presence of her large gravestone rubbing with flag explains directly why Rauchenberg and Johns felt they had learned from a master in their found-object forays through Lower Manhattan.

Experimental processes abound in the final gallery, evidence that artists everywhere were searching for new means of expression, letting chance take its course, and trying to usher in a new era of art making. Otto Piene’s dramatic drawing looks like he made tire track across the paper, but he actually created it by holding his paper over a candle flame and letting the soot make the marks.

Otto’s also the artist that founded Dusseldorf’s Zero group in 1958, stating “Zero is the incommensurable zone in which the old state turns into the new.”

Thanks to curator Samantha Friedman for taking his inspiration and creating such a satisfying, revealing show that’s perfect for making the transition from 2020 to 2021.

See our favorite works on our Flickr album and walk through the show with the curator here.