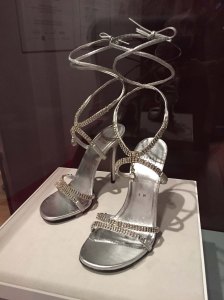 It’s a clever journey through one man’s shoe collection. Walk This Way: Footwear from the Stuart Weitzman Collection of Historic Shoes, on display through October 8, zigs and zags through the fourth-floor gallery of the New-York Historical Society, presenting new insights to shoes and the history of American women in the workplace (and dance floor) through three centuries.

The emphasis is on history with a dash of celebrity and tons of glitter and glamor. See what we’re talking about in our Flickr album here.

The introduction, dedicated to collecting, provides glimpses into how and why shoe collections begin in the first place – wedding memories, baby mementos, and even Revolutionary archeology (go, shoe buckles!). Whether it’s everyday people or museums, it seems that there’s always a reason to collect shoes. 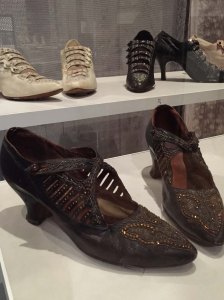 The presentation section of the show describes how footwear can be transformative – taking a dowdy career girl into an elegant, champagne-sipping flapper.  Or, more recently on Broadway, taking Cinderella to the ball or Billy Porter (aka Lola) to the town saved by Kinky Boots.

The shoes here show the progression of fashion and pop culture of trends and dance crazes that required show-off shoes.  First, it was “artistic” women who needed embroidered footwear to peep out under those Fortuny gowns. Then, it was ragtime music and high-buttoned shoes.

Eventually it was all about those small-heeled, strappy statement makers for the Charleston and Tango in the Jazz Age. Women were moving so fast, that they needed to make sure the shoes stayed on their feet. 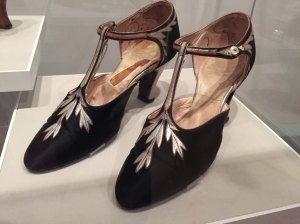 Next, the show tells the history of shopping in New York entirely through shoes – the evolution of Ladies’ Mile in the 1860s, the department-store-as-entertainment trend of the 1890s on Sixth Avenue, and window shopping.

It chronicles the rise of collection shoes sold exclusively at Saks (before the shoe department there had its own zip code) in the Forties and the rise of the designer label. 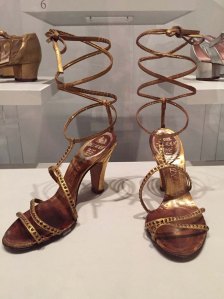 Fads, styles, and designs like spectator pumps, platforms, high-buttoned shoes, Mary Janes, T-straps, and slingbacks are all there to tell their stories – the women who wore them and the men and women who created them. There’s even a nod to the provocative gold and silver sandal craze inspired by Hollywood sirens starring in Biblical epics and toga dramas of the 1930s and 1940s.

Back toward the end of the gallery, NYHS pulls out the history book and takes you on a brief journey to a time when the United States was the center of the global shoe industry.  They make it clear that working in the industry, beginning in the 1850s, was a way for women to step into the greater economy. 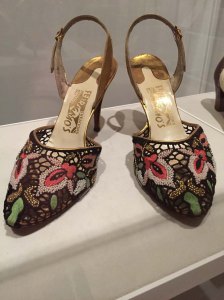 By 1900, the United States was largest shoe producer in the world, and women were one-third the shoe industry labor force and 20 percent of the total American workforce. By 1910 in the era of Ragtime, eastern Massachusetts and New York City were shoe manufacturing capitals of the world.

The show puts a spotlight on Beth Levine and the other female designers who began their own labels and the current generation of concept shoe designers emerging from New York City schools (part of a program launched by Weitzman).

Fashionistas have been flocking to this show since April. Be sure to see it before this weekend so you can begin to look at your own shoe collection through an entirely new lens.