Show curator, Georgios Boudalis, and map of how new book technology spread in the ancient world

How did people make the transition from reading and writing on scrolls to creating bound books? And what did it have to do with making socks and sewing?

You’ll take the journey across several centuries in The Codex and Craft in Late Antiquity, an exhibition on early bound book forms on display at the Bard Graduate Center Gallery through July 8.

Curator Georgios Boudalis of Thessaloniki’s Museum of Byzantine Culture explains how papyrus (or parchment) packages were joined together and modified over time by sewing, thread-looping, cutting, gilding, and fancy leather embellishments. 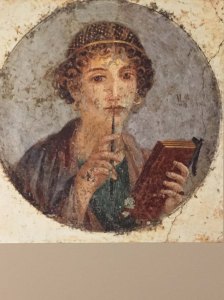 Modern readers constantly debate the pros and cons of reading on tablets versus bound books, so it’s relevant that the exhibition’s story begins with fourth-century tablets.

Ancient tablets are about the same size as iPad minis, evidence that young people were using portable re-writable (i.e. wax) media long before the modern era. Just look at the portrait of the “Poetess of Pompeii.”

Boudalis makes the case that the technological transition to the “big book” idea began when craftsmen started to modify wax tablet frames (i.e. holes and grooves) so they could stitch and loop several together in a stack. After that, the stacks began to sport wooden covers.

The show includes some rare, early ninth-century manuscripts, when this type of book production was mainly commissioned by monastic religious orders. 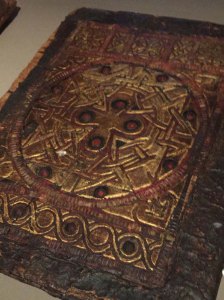 In 1911 on his annual pilgrimage to Egypt, J.P. Morgan seized the opportunity to buy several old bound manuscripts discovered in a dry well in the Fayum oasis. The bound pages, most likely a Coptic monastery’s entire library, were hidden a thousand years earlier by monks to save their literature and gospels from destruction by invading armies.

The Morgan Library generously allowed Boudalis to examine the fragile bindings on this ninth-century treasure and lent it to Bard for the exhibition.

Complex looped-thread techniques were used to join sections of these early books – technology application used by many ancient cultures. As evidence, the exhibition features ancient woven leather belts and creative looped-knit socks next to woven book straps and looped-thread bindings of the manuscripts.

Complicated textile patterns and interlocking designs on textile fragments are shown next to similar gilded and tooled leather book covers. 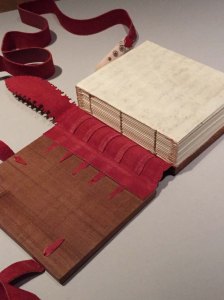 Gilded and tooled leather shoes were likely made by the same craftsmen who cut, tooled, and gilded leather book covers. Take a look at more on our Flickr album.

As ancient people sought more convenient and artistic packages of their intellectual property, they turned to skilled craftsmen to create it.

Listen to the Boudalis speak about the art of sewing and craft in the birth of books and see his examples of Peruvian feathered blankets, Parcas textiles, and fish nets from Camaroon – which all use simple, one-thread loop techniques to create astonishing things: