Antonio’s 1986 illustration of Tina and Mick Jagger for Vanity

Music, fashion, and art were never mixed up so deliciously as when Antonio was working in the studio, surrounded by breakdancers, supermodels, street accessories, and couture. Glimpse the pulsing lines and beat at El Museo del Barrio’s celebratory exhibition Antonio Lopez: Future Funk Fashion through this weekend.

With his partner, Juan Ramos, the dynamic duo changed the way the fashion industry thought about drawing, line, color and style, infusing the typically staid haute couture with ethnic twists, flair, and celebrity in a way no one before had dared. Pencil or conte crayon in hand, Antonio broke down barriers and walls, infusing the New York and Parisian fashion worlds with lively banter, music, and beauty that only a savvy, streetwise Puerto Rican New Yorker could.

The show is a tribute to the 360-degree life that produced the America’s greatest fashion illustrator during the Mod- and disco-infused Sixties and Seventies.

The early work from the Seventies is tight, controlled, and more-or-less a jigsaw puzzle of drafting mastery. Witness the Gentleman’s Quarterly illustrations mixing menswear, muscle, and motorcycles, which were considered too racy for the day. Futurist angles, pointed pencils, and lavish details will blow you away.

Around the same time, American master Charles James took note of this FIT wunderkind, asking Antonio to document his entire archive of sumptuous gowns and daywear. Although this ten-year collaboration is not featured in the Fifth Avenue show, look here to see the digital library of Antonio’s work for James, now in the collection of the Chicago History Museum.

As the style cauldrons of Fiorucci, Max’s Kansas City, and Studio 54 amped up, Antonio and Juan began curating their entourage of uptown and downtown style divas, which included legends Jessica Lange, Jerry Hall, and Grace Jones. 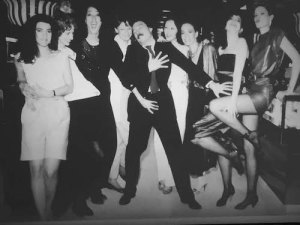 Antonio’s Girls surround him in the 1980s

The message: live and draw large. Subjects for illustrated fashion spreads were styled, posed, and recorded in Antonio’s hand, all to a pulsing beat. To get everyone in the mood, innovative street dance crews were given free rein to spin, pop, and twirl during the sessions.

No wonder that Antonio’s mature work leaps off the page, lines swirling, accessories flying. Publications like Vogue, The New York Times, and Warhol’s Interview just had to have it, and published his drawings over and over.

In the age of Snapchat and Instagram, it’s hard to over-emphasize how revolutionary Antonio’s vision was at the time. His two-dimensional visualizations left fashion photography in the dust. As Ms. Missoni once said, “He transformed the clothes.” Take a look at the Flickr feed. 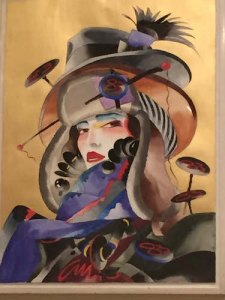 El Museo is distributing copies of the Interview magazine issue that Antonio and Juan edited. Pick it up as you peruse the serious sampling of celebrity-infused work in the show – Tina Chow, Karl Lagerfeld, Billy Idol, and Tina, to name a few. To give exhibition goers a feel for the pizzazz in Antonio’s work and life, there are videos of break dancers in his studio and a great video of him working from a live model as part of a drawing demo for students at his alma mater, FIT.

Too bad that Valentin de Boulogne (Caravaggio’s follower, currently on view at the Met, who also styled and staged models) lived 350 years too early to enjoy this joyful, breakneck, vibrant 20th-century beautiful-people scene with subjects jumping out of the picture frame.

It’s hard to underestimate the influence Antonio had on the cultural beat of New York in the Seventies and Eighties. It was all about the mix – high art, pop art, high fashion, street style, and ethnic culture.

Take a look at Antonio’s 1983 workshop at Pasedena’s ArtCenter College of Design, and see the master at work creating, staging, and transforming what he sees and feels with gestures as large as Pollack’s: