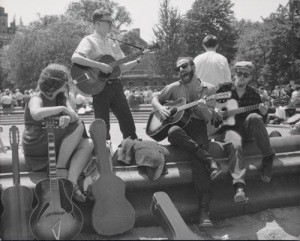 The large map inside the exhibition tells the entire story of how a folk music revival germinated on a few blocks in Greenwich Village in the 1950s and exploded into a national mania for twelve-string guitars, songs of protest, and music that paid tribute to deep, deep roots of the American experience.

The Museum of the City of New York tells a fascinating tale with its multimedia exhibition, Folk City: New York and the Folk Music Revival, through this weekend. Take a look at some of the show’s highlights in our Flickr album. 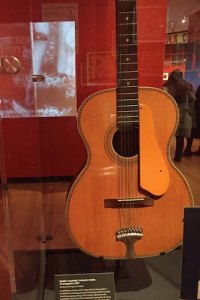 The show ties together the tale of how Woody Guthrie and Alan Lomax got the ball rolling by shining a spotlight on Appalachian and Southern purveyors of down-home folk singing and inspiring a generation to look back, pay tribute, and carry it forward. MCNY has plenty of listening stations scattered throughout the gallery, offering up rare recordings that speak to the roots of popular music of the Sixties.

It’s a revelation to listen to Lomax’s 1934 recording of Ledbelly singing Good Night Irene and Midnight Special long before Pete Seeger, The Weavers, and Johnny Cash catapulted them to the charts in the Fifties and Sixties.

Flyers, broadsides, and other paraphernalia from Greenwich Village clubs paper the walls and vitrines, as the show steps through the story of how that sleepy NYC neighborhood transformed itself into a destination for the likes of Bob Dylan and other activist-artists who inspired a generation. 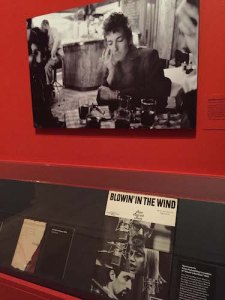 Music studios, clubs, publishing houses, coffee houses, and cold-water flats were all jammed into a few city blocks that functioned like a 24/7 open-mic night. Back in the late Fifties and early Sixties, music was pouring out of nearly every door on Bleecker Street and MacDougal.

The convergence spawned a network of producers and publishers who felt it was their mission to bring folk music to a wider audience – uptown at Town Hall, on alternative radio stations across the country, and executives at the big labels. Some of the highlights at the back of the gallery are Dylan’s handwritten lyrics for Blowin’ In the Wind and Mr. Tambourine Man.

Political battles are found at every turn in the installation, from Seeger’s encounter with McCarthy’s House Un-American Activities Committee to inspirational performances by Pete, Odetta or Peter, Paul & Mary at historic marches and protests. The music was always there, intertwined with the events of the day. 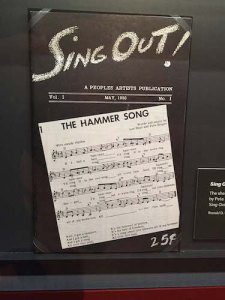 Although folk and roots music inspired artists like The Beatles and The Rolling Stones, the MCNY show notes that after Dylan went electric and the British invaded New York, the folk music juggernaut lost some of its steam. No matter. You can still see it all recreating itself on Bleecker Street at The Bitter End any night of the week, listen to an up-and-coming singer-songwriter, and view lots of those historic posters on the back wall after MCNY’s show closes.