The Sinclair dinosaur was a sensation when he arrived in New York City to star in the 1964 World’s Fair. Millions of visitors queued to have their pictures taken with him and get a glimpse of life-size replicas of the scale and scope of the Mesozoic megafauna.

It may surprise you to learn that Sinclair and T. Rex are living a blissful retirement in Texas where there are no Unispheres, freeways, lines of tourists, or ticket booths…about 75 miles southwest of Fort Worth in a state park with another unique connection to New York.

Sinclair relaxes in a Texas corral

The gargantuan dinosaur trackway up on the fourth floor of the American Museum of Natural History is from the Paluxy River in Dinosaur Valley State Park, where these two former New Yorkers have retired.

Back in the Thirties, AMNH field explorer Roland T. Bird told his boss, Barnum Brown, about the Texas trackways. In 1940, aided by WPA crews, the submerged tracks were excavated, cut into 1,200 pieces and shipped off to the AMNH, the Smithsonian, the University of Texas, and a few other places.The excavation was a media sensation, with chronicles appearing everywhere.

In New York, the jigsaw-puzzle track pieces were eventually reassembled and placed under the Apatosaurus/Brontosaurus, where they remain today. 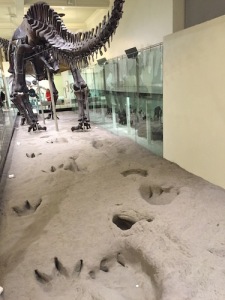 Apatosaurus atop Paluxy trackway in New York at AMNH

The big, round blobby tracks that appear to match those of Apatosaurus are reckoned to be those of Sauroposeidon and the three-toed tracks running right alongside are those of Acrocanthosaurus, a predator.

Even though this spectacular trackway got moved to New York, there are still plenty in in the park. There are at least five big sites, which have all been documented in the Dinosaur Valley State Park footprint-mapping project. See the results here. When you click on each photo mosaics or track overlays, they will open in Google Earth. Find the R.T. Bird site under Track Site Area 2.

But how did the New York dinosaurs get to Glen Rose? The entire dinosaur group toured the United States for a few years after the Fair, right around the time that Texans lobbied to have the Paluxy Trackway declared a state park. No dinosaur fossils at the time, but there were lots of footprints, mostly underwater but a few on the shoreline. Neighboring ranchers donated the land, hoping to keep the site intact and spur tourism dollars.

When the Sinclair tour concluded, Atlantic Richfield’s idea was to donate all the dinosaurs to the Smithsonian, but when the Smithsonian said they didn’t want the group, the band broke up. One went to Vernal, one to Cleveland, but Glen Rose was the only location that managed to get the two biggest stars. Did the New York connection make the difference?

It’s hard to know, but the recently opened Perot Museum of Nature and Science features a pop culture corner in its dinosaur hall with replicas of all of the NYC’s World’s Fair dinosaurs!

For the complete story, check out this video of the tracksite and an introduction to the Google Earth mapping project, old videos of Mr. Bird’s historic 1940s excavation, and cameos by the Sinclair dinosaur and friends.