The American Museum of Natural History hosted a sold-out event at the crack of dawn this week to give Pluto fans (and Dr. Neil) a real time, play-by-play of what was happening on the edge of our solar system.

Check out our Flickr feed to see the visualizations created by Dr. Carter Emmart’s team at the Hayden Planetarium and glimpse some of the (human) stars at Mission Control and others who weighed in via Google Hangout from planetariums from around the world.

Here are 10 essential things you should know: 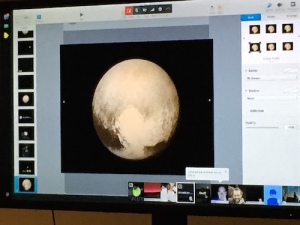 Pluto’s photo from earlier in the week appears on the Google Hangout, showing the “heart” area

1) It was a fly-by. The New Horizons spacecraft flew by Pluto. It didn’t land or orbit around it.

3) Pluto has five moons. New Horizons is looking for more.

4) This marks the furthest point of human exploration to date. It happened just before 9 a.m. on Tuesday, July 14.

Just in — the latest from New Horizons: July 17 photo of smooth frozen plains in Pluto’s “heart”

5) The spacecraft, New Horizons, is the size of a grand piano. It traveled over 3 billion miles.

6) It took New Horizons 9-1/2 years to get to Pluto. It was launched January 17, 2006 and is expected to keep going out into space for another ten years. For the full story, click here.

7) The new photos confirm that Pluto is young and doesn’t have any craters (like our Moon or Neptune). Its 11,000-foot ice mountains are only 100 million years old (compared to the Rockies at 80 million years old). They formed during our Cretaceous period. More discoveries to come photos and data slowly stream in. 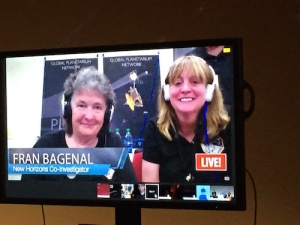 8) The transmission speed from the spacecraft is half the speed of an old dial-up modem. That’s why mission control will be receiving photos and other data from this fly-by for the next sixteen months or more.

9) Twenty-five percent of the people on the New Horizons project are women. Alice Bowman is the first female Mission Operations Manager at APL Johns Hopkins.

10) Dr. Neil keeps correcting people to call Pluto a “dwarf planet” but all of the scientists interviewed on the mission love it anyway. Some fans think it should be “grandfathered” into the solar system as an honorary planet.

Does Pluto have a molten core? What’s the topography of Charon? Are there geysers? Are there other moons? What’s going on with the Kuiper Belt? Stay tuned as New Horizons keeps going.

NASA has a TV channel featuring (now) daily media briefings on the photos and data and has a channel with all the updates on New Horizons, including links to new photos.

Also, tune into the New Horizons site hosted by mission control at APL Johns Hopkins. Next month, releases will be on a monthly basis.

Real-time visualization of how the New Horizons maps Pluto

Credit goes to Carter Emmart, AMNH’s director of astrovisualization, and the other creators of the Digital Universe for inventing this 4D open-source software and sharing it with planetariums around the world and applause for the scientists that made this expedition happen!

Nearly 11,000 people watched this live telecast from AMNH. If you have time, enjoy it for yourself by watching this YouTube recording of the event, currently at 46K views and counting: