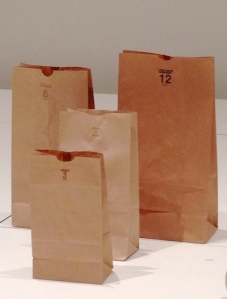 What will the MoMA curators pull out of the design collection next? Designing Modern Women 1890–1990, running through October 19, puts the spotlight on furniture, textiles, graphics, performance, kitchens, and even inflatables designed by some innovative women over the last century. How can you not love a show that begins with 1890s modern-dance provocateur Loïe Fuller and ends with 1980s pop icon Grace Jones?

The crowd last weekend was loving every bit of it, pausing to watch videos sprinkled throughout the show and marvel at designs – some 80 to 100 years old that are as modern today as they were at their creation.

The next time you carry away your morning muffin from the coffee counter in that little white paper bag, ponder that the flat-bottomed paper bag was invented in the 1870s by Margaret E. Knight and Charles B. Stilwell. Ms. Knight not only invented this classic, but also invented the machine that made it and was one of the first American women ever to receive a patent. 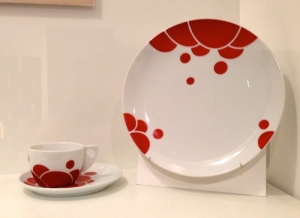 No, the dinner service is not from Pottery Barn. It was created in 1901 by the Austrian design team of Jutta Sika and Koloman Moser. Didn’t I just see a copy of Eileen Gray’s 1927 adjustable table at the D & D Building? Open shelving in your new, modern kitchen? Yes, that was Charlotte Perriand’s idea, and MoMA has (for the first time) installed this full-size, fully efficient, ground-breaking kitchen from her 1952 project with Le Corbusier.

And what about the Slinky? Invented by Betty and Richard James in 1945. You’ll have fun peering into the design cases and learning more about the women behind some remarkable things. 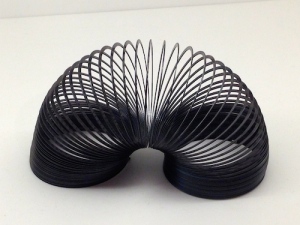 Slinky was designed by Betty and Richard James in 1945

In the 1960s portion of the show, you’ll see those famous Fillmore posters designed by Bonnie Maclean. And there’s an entire wall filled with iconic pop and punk graphics – all created by female designers – that should be familiar to anyone that traversed the downtown CBGBs scene.

There’s no digital media to accompany this fantastic show, so take a walk through our Flickr site. All of the items are from MoMA’s own collection, and we’ve taken slight liberties by arranging the photos in the show album in chronological order of the year that each design debuted.

And to bring it all back to the beginning of this design innovation tribute: Here’s a glimpse of 1897 Art Nouveau performance art by Loïe Fuller, courtesy of the Lumiere Brothers. The color you see here is a result of hand-tinting the film, but her actual perfomances used new theatrical stage lighting for which she held numerous patents. Listen to the MoMA curators explain her influence, but get over to MoMA (or the Flickr site) to take in this super-fun tribute to 100-plus years of smart women who thought differently and made it happen.

3 thoughts on “The Paper Bag Was Her Design”