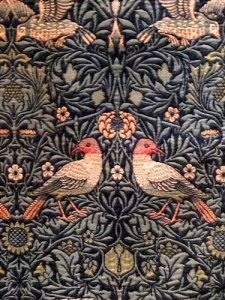 Detail of the large woolen Bird textile that Morris designed in 1878 for his home that was still being sold decades later.

William Morris not only did his historic homework, but was able to channel his convictions about the magic of the Medieval to tap into what artistic Victorian shoppers wanted – stylized visions of nature and old-school craftsmanship, the way it was done in the “old days.” See the evidence in two Metropolitan Museum of Art shows on right now — The Pre-Raphaelite Legacy: British Art and Design (running through October 26) and William Morris Textiles and Wallpaper (closing July 20).

You’ll see how Morris used the historic textile collections at the Victoria & Albert Museum as inspiration for his modern wall coverings and textiles. In the little low-light gallery outside the museum’s textile center –many designed by his designer, John Henry Dearle — right next to the older textiles that inspired them both. You’ll be able to compare Morris’s own winding, intricate patterns with those woven by the 15th-18th c. Venetians, Germans, and Spaniards.

Voided velvet and silk from Venice, 1420

As our Flickr site shows, the Met has its own examples for you to enjoy.

Morris began designing in 1861, went through a couple of iterations of his company and collaborators, and finally landed at Hanover Square in 1917, where his workshop was located just a few steps from Liberty of London on Regent, another retail hotbed of the Arts and Crafts movement where many of the Pre-Raphaelites shopped. As Oscar Wilde once remarked, ““Liberty is the chosen resort of the artistic shopper.”

In 1923, the Met decided to scoop up all of the still-being-sold Morris textiles from London. What you’ll see in the show aren’t the originals, but likely subsequent runs of the super-popular block-printed decorating papers and yardage. 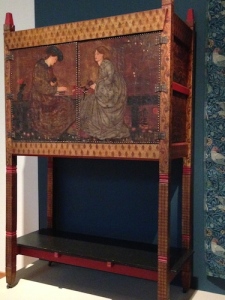 The Backgammon Players, the faux-Medieval, mixed-arts furniture collaboration that started it all 1861, with the 1878 Bird wall hanging far right.

The Pre-Raphaelite Legacy has paintings, photos, sculptures, and other works by a wide range of artists. Check out the early painted furniture that Morris did with Edmund Burne-Jones (1861) and the book, written by Morris in archaic English and illustrated by Mr. Burne-Jones at the height of Morris mania (1898).

Next to the furniture collaboration, the curators have hung Morris’s own Bird textile, an intricate woven wonder of woodland creatures and forest marvels. The detail will blow you away, but so will the fact that the original was created in 1878, but what you are looking at was likely manufactured decades later for artistic shoppers and décor enthusiasts who just had to have it.