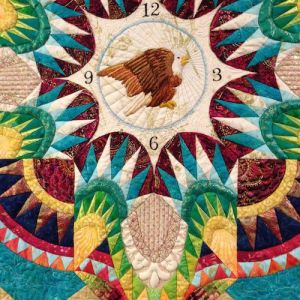 When you’re used to seeing large, magnificent quilts at the American Folk Art Museum, it’s a bit of a surprise to confront so many small ones as you walk through the doors of the New York Transit Museum’s annex to view the Grand Central Centennial Quilts exhibition (through July 6). But they’ve arrived from 15 states as part of a nationwide challenge to quilters to use some custom-designed fabric featuring Grand Central’s zodiac sky to say “Happy 100th Birthday” to our favorite transit hub.

A competition run by The City Quilter, a gallery and quilting emporium on West 25th Street, and American Patchwork & Quilting Magazine, inspired more than 80 quilters from 25 states to design, piece, stitch, and embellish creations that evoke the historic space. Everyone had to make a quilt to the same dimensions and incorporate the custom-patterned fabric designed by The City Quilter, “GCT Constellations” (the zodiac ceiling) and “Grand Central” with many of the terminal’s most iconic architectural elements. 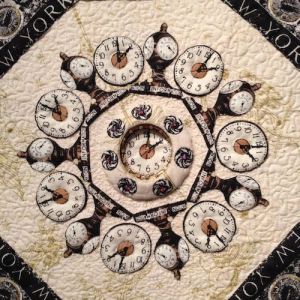 You’ll see 30 of the best – three winners, nine honorable mentions, and other top finalists. Pop into the Annex and take a look.

The Grand Prize went to Baltimore’s Amy Krasnarsky, who used Beauty Blocks, sequins and trapunto to evoke the people who have trod those marble floors over the last 100 years. Amy worked in the acorns and oak leaves, which the Vanderbilt family chose to be their symbols and which are embedded in every nook and cranny of the lavish terminal. Once you begin looking, you’ll see them everywhere. 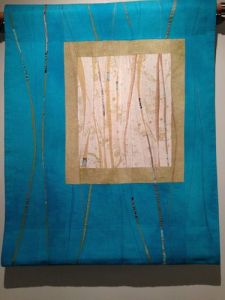 Abstract Second Prize quilt by Beth Carney of Yonkers, Chasms 16: Under the Stars

Abstraction was rewarded in Beth Carney’s lyrical interpretation, Chasms 16: Under the Stars.

She used sinuous, meandering stitched lines to evoke the passersby, train lines, veins of marble, tracks and tunnels – everything she sees when she travels down to the City and through the GCT from her home in Yonkers.

Hudon, Ohio’s Nancy Gary received an Honorable Mention, but achieved something quite unique – simultaneous views of the interior and exterior of GCT. Her quilt accurately conveys the dramatic interior of the terminal and those magnificent windows while also showing us the line-up of taxis along the 42nd Street stand. Everything is where it should be, including the black square on the ceiling – the tiles left by the restoration crew to show just how sooty the interior marble and zodiac ceiling used to be.

Detail of Kim Gimblette’s quilt, focusing on GCT’s track diagrams and the future East Side Access

Kim Gimblette of Ossining, New York, was one of the few that paid tribute to the track diagrams. She even added one in a different shade to represent the future of the station – the mighty East Side Access project that will eventually bring the Long Island Rail Road trains into Grand Central.

We couldn’t resist posting photos some of these amazing details here on the blog page, so go to our Flickr album to see the full-scale designs. The City Quilter’s Flickr page shows each of the artists next to their work. Click here to read each artist’s comments about their quilts.

Does this make you nostalgic for New York and wonder about what you’d create? If you have some time to sew, go to City Quilter’s on-line shop and order some NYC-themed fabrics. Get inspired by cotton yardage featuring the Big Sky of Grand Central (two color ways), architectural landmarks, the skyline at night, subway train cars, and – in case you wanted to channel a little Damien Hirst crossed with NYCT – subway dots of all the lettered and numbered lines.

Detail from Nancy Gary’s quilt, featuring the taxi stand and so much more