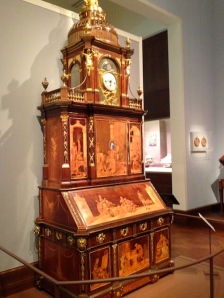 It’s lonely at the top. More specifically, it’s lonely in the Metropolitan Museum’s Gallery 553, where one of the biggest YouTube stars in NYC museum history is holding court until January 26 – David Roentgen’s Berlin Secretary Cabinet, which has racked up 4.4 million hits since his show, Extravagant Inventions, closed last January.

That’s right. A piece of mechanical furniture has 4.4 million YouTube fans (in addition to 13K on the Met’s own website) – quite an achievement since it had only around 200,000 when its show closed. It’s not the only piece of mechanical furniture to gain big YouTube numbers (another has over 91K), but to put the Cabinet’s achievement in perspective, consider that the Met’s McQueen video has only racked up 72,000 views in the two years since that blockbuster ended.

The crowds were crazy for the 18th-century marquetry extravaganza (see our earlier post), and the Met asked the Kunstgewerbemuseum, Staatliche Museen zu Berlin if it could keep the YouTube star a little longer.

The Cabinet’s video, displayed also in the gallery, has gone viral with 4.4M views

The Met dedicated a cozy corner of its First Floor to the Cabinet and some of its other pieces from Mr. Roentgen’s studio — a rolltop desk and tall clock from the Met’s own collection, and a mechanical table lent by the Cooper-Hewitt. Take a closer look on our Flickr feed.

But every time we pass by, the Cabinet seems a little lonely. The Met says it’s likely the most expensive piece of furniture ever manufactured (there were only three), but it seems like the Fabergé eggs in the hallway are getting all the foot traffic. Yes, they’re beautiful, but a piece of marquetry that’s gone viral is something that deserves some in-person praise.

During the holidays, just hang a left at the Christmas tree. Look for a tall stately Cabinet in a gallery on the right after you pass through the European Sculpture Court and before the rooftop elevator. Spend a little time with the star before he decamps the Big Apple for Berlin.

Roentgen’s Rolltop Desk also has its own video and has 59,000 YouTube fans of its own

If you want to see the Roentgens in performance, the Met’s hosting a gallery talk and demo of the mechanical furniture at 2:30pm in Gallery 553 on December 17 and January 14

The Cabinet’s mega-hit video (produced by the Berlin museum, but posted by the Met) is also on display in the gallery — no people, no curators, no talking, no cats…just subtitles, a human hand wielding a key, and the magnificent magic of Mr. Roentgen. Hold on for the hidden easel.