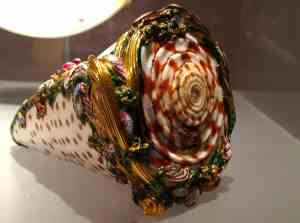 Our vote for best “fancy” object: A beach shell embellished with enamel and gold by Barnabe Sageret around 1745.

You wouldn’t think that a presentation of luxury items would emphasize democratic participation, but that’s just what the Metropolitan Museum has embedded (on line and onsite) within its thought-provoking, beautiful show, Plain or Fancy? Restraint and Exuberance in the Decorative Arts, on view on the first floor through August 18.

The curators of European Decorative Arts have assembled “plain” objects to the left side of the gallery, “fancy” ones on the right, and…well, they’ve asked you to decide about the ones in the middle. Tablet screens in the exhibition and the Met’s web site have an interactive that lets you choose if some of these are to your taste and how you’d classify them. You can enter a comment about each that shoots off to the show’s Twitter feed.

Our vote for best “plain” object: The obviously expensive porcelain bowl used by Marie Antoinette at her “fantasy” dairy farm. The curators tell us that the head of the Sèvres Manufactory was worried that his other clients would think it was too “barbaric.”

The whole idea of the show was to gather some of the greats from the European Decorative Arts collection and ask the viewers to consider their own feelings about “plain” and “fancy” (derived from “fantasy”). If something is “plain”, do you feel more noble admiring a piece’s elegant simplicity? If you see a grandly embellished bauble, does it make you cringe, or give you a sense of relief that someone else’s purchase is stimulating the economy?

The curators don’t refrain from hammering these gems into their socio-political contexts. One of the “plain” porcelains is a Sèvres bowl used by Marie Antoinette as she cavorted with friends on her fantasy dairy farm pre-Revolution. Several “plain” pieces of silver tableware were likely made from melted down “fancy” pieces after Cromwell’s 17th-century reformation in England. The photos on our Flickr site let you in on what the curators said about many of our favorite items.

Is it “plain” or “fancy”? A clean design on a giant 1635 glass goblet inscribed with a detailed cartography of the course of the Rhine River. J.P. Morgan liked it and gave it to the Met.

Items range from the 1400s to the 20th century. One of our favorites in the “fancy” imagination department is a snuff box made from a beach shell decorated lavishly with enamel and gold. Who wouldn’t want to look at that? Another is a gigantic Dutch glass goblet that has been engraved with a detailed map showing the entire course of the Rhine River. Amazing.

The show is filled with Wedgwood, Sèvres, Wiener Werkstätte, and other surprises. Although you can see the items in the show on the Met’s website, it’s much better to examine these items up close in person and read what the curators had to say about each.

Better yet, think about how you feel about the designs, and weigh in on Metmedia and Twitter. What do you choose?