Link Wray in the 1950s and the guitar that introduced the power chord, wah wah, and distortion to rock ‘n’ roll

It’s not all flute music. Did you know that Link Wray, a Shawnee rock innovator, created the wah-wah, the power chord, and distortion echo that all rock superstars since the 1950s adopted? It’s just one part of the story told by Up Where We Belong: Native Musicians in Popular Culture, up through August 11 at the National Museum of the American Indian down at New York’s Customs House.

Don’t take our word for it. Take a seat in the comfortable bandstand-lounge inside the show and watch as Led Zeppelin’s Jimmy Page and The Edge discuss the importance that Wray’s innovations had on them and everyone in the scene.

The show doesn’t ignore jazz, blues, or rap but a lot of the pizzazz is seeing the stuff associated with folk, rock, and country stars alongside quotes (on the walls and in video clips) from legends like Slash, Ringo, Townsend, and Dylan testifying to the ties they had to fellow artists like Robbie Robertson, Jessie Ed Davis, and others. The show has historic (and beautiful) guitars and that famous multi-colored coat worn by Jimi Hendrix. You’ll really be amazed at the profusion of talent and historic connections. 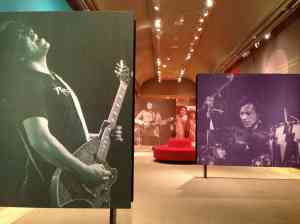 You don’t normally associate Jimi Hendrix with the tribes, but the NMAI scholars reveal that his paternal grandmother was Cherokee who once played on the vaudeville circuit. It’s also a surprise to see Randy Castillo’s drum set from the last Mötley Crüe tour suspended reverently overhead. (Randy replaced Tommy Lee.) Check out our Flickr site for views of the show.

The NMAI scholars, as usual, did a stellar job digging out the facts behind the men and women honored. Like reminding us that Jessie Ed Davis first met John Lennon at The Rolling Stones Rock and Roll Circus and that Johnny Cash was one of the first pop music voices singing out on behalf of the Native American cause back in the 1960s.

The Hendrix coat of many colors

The heart of the show, however, is the music. NMAI made sure that there’s plenty of opportunity to listen in to why these stars were great. You can sink into big, red settees throughout the space and snap on headphones, relax in the bandstand-like lounge room to watch 20 film clips, or play with iPads in the listening gallery. You’ll enjoy hearing Buffy sing “Universal Soldier”, Kristofferson and Coolidge performing their Grammy-winning duets, Link Wray rocking out with “Raw-Hide” during the American Bandstand days, and Illinois Jacquet’s swinging tenor sax on “Stompin’ at the Savoy”.

The NMAI did an incredible job not only with the show itself, but also with its fascinating run-of-show blog, which includes articles on how the Hendrix coat was loaned to the show, jazz great Mildred Bailey, and recollections contributed by the show’s visitors.

Enjoy this walk through music history and reconnect with some of the best in the business. A truly wonderful slant on what makes American pop culture so great.  If you’re in New York, get down to see Rita Coolidge in person at her free NMAI concert at 6pm on Thursday, August 8.