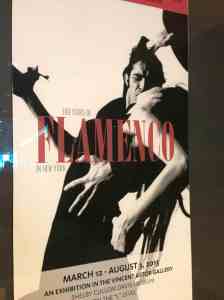 There’s no way to cool off the Spanish heat you’ll experience at the dance-til-you-drop exhibition Flamenco: 100 Years of Flamenco in New York, currently in the last weeks at NYPL’s Library of Performing Arts at Lincoln Center (until August 3).

NYPL gives us videos, recordings, a few costumes, and other memorabilia, but mostly you’ll hear the castanets and rapid-fire footwork of the best of the best. Who knew that the first woman to appear in front of Edison’s movie camera was Carmencita, the Spanish sensation who debuted at Niblo’s Garden in 1889, and had a fairly good run at Koster & Bial’s Music Hall on 24th and Sixth Avenue. Her portrait by Sargent is at the Musee d’Orsay and her portrait by Chase at the Met. Here’s a link to Edison’s 1894 flick.

This first Spanish-dance craze was further fueled in 1916 by the arrival in New York of La Argentina (Antonia Merce), Spain’s first modernist dance artist who fused classical dance, regional styles, and Flamenco. A decade later, she returned with a full company and presented New York’s first full-length Spanish dance-theater piece. By then, Ruth St. Denis, Martha Graham, and Ted Shawn were already incorporating Latin moves, gestures, and rhythms into their performances, and La Argentina’s company had a spectacular run. Here she is in a solo.

Although there’s lots more to the story, one of the best parts of the exhibition features photos, albums, videos, and recordings of the fast footwork of Carmen Amaya, who Sol Hurok billed as “The Human Vesuvius” in her 1941 New York debut. She could kick the 15-foot train of her dress right into the air. 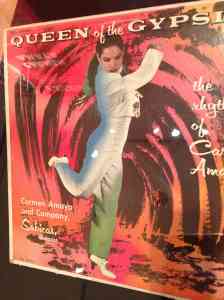 Amaya’s innovation is that she injected a bit of the Gypsy style into Flamenco and was somewhat of a Spanish-dance rule-breaker – sporting tight-fitting trousers to show off her super-fancy footwork. Superstars Dietrich and Hepburn were also wearing trousers at the time, but it was a first in Amaya’s field of work.

Good move, Carmen, as shown in this clip from Follow the Boys, a 1944 all-star vehicle released by Universal to boost morale during the War. It’s like watching a great jazz tapper at work. Move over, Riverdance people.

Source: Archival clip, Follow the Boys, from the DVD, Queen of the Gypsies, A Portrait of Carmen Amaya.