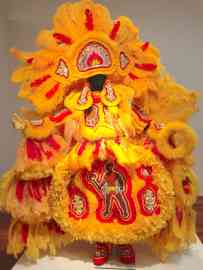 “Chief Albert Lambreaux: No Hum Bow, Don’t Know How” costume. In the pilot, the character returns to his devastated home six months after Katrina, enters, and emerges in this costume.

Towering feathered headdresses, intricate beaded panels, plumes, and miles and miles of ruffled edging adorn more than a dozen Mardis Gras Indians that are camping out until November 3 at the Cameron Art Museum in Wilmington, North Carolina.

The dazzling incarnations are all part of the exhibition, Well Suited: The Costumes of Alonzo V. Wilson for HBO’s ® Treme. Alonzo was on hand for the opening, where he explained the challenges he faced designing elaborate, 60-lb. Mardis Gras Indian costumes for the actors playing characters living in New Orleans’ Tremé neighborhood (the Third Ward) in the months after Hurricane Katrina.

The African-American men who bead the panels and feather the elaborate costumes for their Mardis Gras Indian tribes typically take all year to execute their visions, which reflect their position in the tribe (e.g. the Big Chief, Second Chief, Spy Boy, Wild Man). To meet HBO’s production schedule, Alonzo and his team often had a much shorter time to create the patches, headdresses, staffs, panels, and shoes for the script’s characters.

Alonzo Wilson explains how the cycle of life and the seasons are reflected on the beaded apron of the “Big Chief: Tree of Life” costume.

For the series, Alonzo felt it was important to embed part of each character’s story into the stories being told on the panels, even if the costume was only seen for a few minutes on TV. Thankfully, the exhibition (and our Flickr feed) lets you closely examine some of this character development-in-beadwork – a chief shedding a crystal tear for his hurricane-damaged home, a white buffalo evoking the return of bounty post-Katrina, and stunning use of hurricane weather symbols amidst a bold S.O.S.

Originally mounted by the Ogden Museum of Southern Art, curator Bradley Sumrall was impressed by Alonzo’s use of narrative that broke through the typical Hollywood stereotypes of African Americans and Indians. “We could have just done a show with traditional Mardi Gras Indian costumes, but Alonzo’s work had so much narrative built in.” With the mix of African-American, Native American, government, city, and current-event references, Bradley felt the layers of meaning in such intricate craftwork was an achievement worthy of a fine-art exhibition.

The NC stop for the show is a way for others to understand a bit more about New Orleans people, neighborhoods, and culture. Plus, Wilmington is Alonzo’s hometown. The movie and slide show inside the gallery provide an even deeper window into to this achievement – showing how Alonzo and his crew learned from the traditional craftsmen, shared new beading techniques, and received some “rescue help” from the locals when the production deadlines were too much to handle.

The exhibition all adds up to win-win storytelling about Alonzo, his team, New Orleans, and the Indians. Read an interview with Alonzo on the HBO blog and see behind-the-scenes production photos on page 40 of the Wilmington magazine Salt.