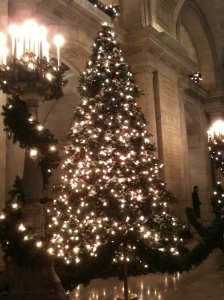 Although Rockefeller Center has New York’s most popular tree, don’t forget to check out two others that are on the list of everyone’s favorites.

The grand tree inside the main entrance of the New York Public Library this season is an Age-of-Innocence wonder that has become the new favorite photo backdrop of New York City visitors this season It’s never crowded inside Mr. Astor’s grand hall, so there’s plenty of time to pose in front of the tree to show the folks back home what a beautiful time they’re having in City splendor. It’s in an intimate, spectacular setting with grand staircases, blazing illuminations, and ornaments evoking the natural world.

Now that Theodore Roosevelt has taken up residence in his Memorial on the First Floor, the American Museum of Natural History has moved one of the most charming trees in the City to the Grand Hall at the 77th Street entrance.

The fun of the Origami Tree is to get close enough to identify each of the 500 folded-paper ornaments by species. This year, the scientific theme is groupings of animals. You’ll find suspended origami doves circling a tree decorated with spiders, dinosaurs, lemurs, skunks, pelicans, cultures of bacteria, jellyfish, and many more surprises inspired by the vast holdings of the AMNH. Volunteers have been working since July to create this delightful menagerie.

If you haven’t seen these holiday wonders, check them out before they disappear.