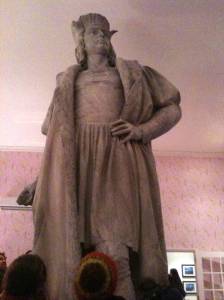 Greeting visitors in his apartment 75 feet in the air

It’s the holiday season in New York, with art lovers rushing to see the spectacular apartment that Tatzu Nishi has created (courtesy of The Public Art Fund) for Christopher Columbus, the man at the center of things near the Time-Warner Building.

He’s been standing atop that column since 1892, so it’s about time that he had us over to see his taste in décor, books, and light TV viewing.  Here’s the Flickr feed, which takes you on a 360-degree view of his digs.

Who knew Captain Columbus was into pop culture? He even has a copy of one of Andy’s early cat lithos in his bookcase. Enjoy the holiday views that Columbus is enjoying, and get your free tickets now, because you won’t be seeing the City from this view again!

What Columbus is reading inside his apartment