It’s never really the Fourth of July in New York without seeing Tom J’s annotated copy of his Declaration of Independence that’s usually shown this time of year at the New York Public Library. 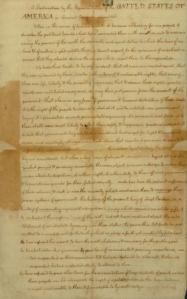 Because Tom’s two-page handwritten draft was diplayed all year in NYPL’s 100th anniversary exhibition, the Library has decided that “It will be given a rest of a few years…” Even though you’re not able to visit Tom’s Declaration in person, the library’s digital team has made it available on line, along with a number of its other revolutionary treasures. Check out:

Ben Franklin’s June 21, 1776 note to General Washington (written while Tom was toiling away in the Philadelphia’s sweltering summer heat) that “a Declaration of Independence is preparing”.

Tom’s original draft of the Declaration with his paragraph objecting to the slave trade, which Congress forced him to edit out. (Check out this blog posting at NYPL and click on the images for a larger view.)

Also check out the first news report on the Declaration in The Pennsylvania Evening Post (dated July 6, 1776), telling everyone that something was up, followed by the classifieds on page 2.